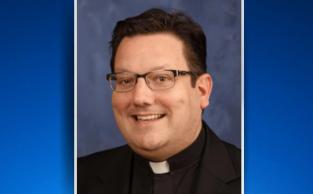 CHICAGO -- An Ohio priest under investigation for questionable communications with a minor took his life in Chicago. The Chicago Tribune reports that Father James Csaszar jumped from the 82-story Aqua Hotel in downtown Chicago and the death was ruled a suicide on Thursday by the Cook County medical examiner's office.

CBS Chicago reports that Csaszar had been on administrative leave and under investigation for about a month.

Csaszar was a pastor at a Columbus area church.

CBS affiliate WBNS in Columbus obtained an email from the chief of New Lexington Police to an agent in the Bureau of Criminal Investigation and Identification with the subject line: "inappropriate relationship between Priest and 16yom."

No charges had been filed.

The Diocese characterized the allegation as "excessive and questionable text and telephone communications with a minor and potential misuse of church funds," the station reported.

Police told WBNS that media devices were seized for evidence.