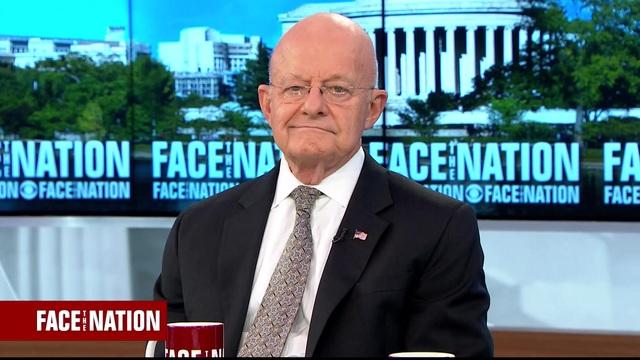 Former Director of National Intelligence (DNI) James Clapper says the use of human sources is "the most benign form of information gathering" amid President Trump's persistent outcry over the FBI's use of an informant during its investigation into connections between Russians and members of the Trump campaign.

"I have an aversion to the use of the word 'spy,'" Clapper said, referring to Mr. Trump's use of the moniker "spygate." "But let's just for the sake of discussion use that term, which conventionally means the use of tradecraft using a formally trained case officer who would mask identity, who would attempt to recruit. So none of the classical attributes of spycraft, if can use that term, were present here. This is the most benign form of information gathering. So to characterize it as a spy or spygate is of course part of the narrative," Clapper told "Face the Nation" on Sunday.

In recent days Mr. Trump has fired off a number of tweets accusing the FBI of planting and paying a "spy" in his campaign, which he on Wednesday termed "SPYGATE" and later decried as "illegal" and "one of the political scandals in U.S. history."

Since Mr. Trump directed the Department of Justice to investigate whether or not the FBI "infiltrated" his campaign for "political purposes," lawmakers from both parties attended briefings this past week about the FBI's use of informants. Senior intelligence and law enforcement officials, including FBI Director Christopher Wray, Deputy Attorney General Rod Rosenstein and Director of National Intelligence Dan Coats, attended the briefings to provide members of Congress with more information.

Clapper told "Face the Nation" that as DNI during the Obama administration, he would not have known about any FBI informant or their decision to use a human source. Clapper said without knowing exactly what the FBI's concerns were at the time, it's hard to say if Mr. Trump should have been warned about the use of informants.

"Subsequently, certainly, particularly when we became more aware of the Russian cyber intrusions, both campaigns were advised of that," Clapper noted.

McMaster "absolutely" agrees with Pence that he couldn't overturn election