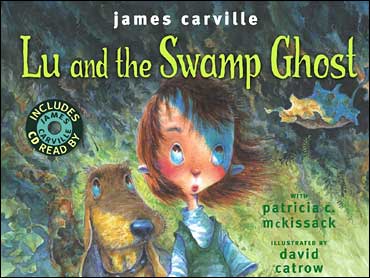 Why do a kid's book?

"Because I was asked to, and Simon and Schuster came to me and asked me, 'Why don't you do a book about your childhood?'" Carville tells The Early Show co-anchor Harry Smith. "I said, 'No, my mother's childhood is much more interesting.'"

His book, "Lu and the Swamp Ghost," is based on the stories Carville's mother, Lucille, told him as a child.

In the book, his mother is known as Lu. But Carville notes, "She was known as Miz Nippy. She was named after a tramp or a hobo, vagabond people going around during the depression, looking for work; and she defended this tramp. The tramp's name was Nip."

Carville submitted an outline of the story he was told as a child and the publisher adapted it with the help of Patricia C. McKissack and asked David Catrow to do the illustrations.

"I am very pleased with this. It has a lot of the lessons we were taught as kids - the difference between riches and wealth and that kind of thing."

As Lu checks her father's turkey traps in the cypress woods, she finds someone or something covered from head to toe in mud. Lu fears she has come across a swamp ghost who gobbles up little girls. She brings the creature cornbread and beans, a slice of country ham, and anything else she can get from the house. Soon Lu realizes that the swamp ghost is a boy down on his luck and in need of a friend.

Carville has two children who "just roll their eyes" when he tells stories about Louisiana and his childhood. He says he has a lot less power as a family man than a political consultant, noting, "In the political arena, my candidates would listen more to me and actually take more of what I suggested."

As for the campaign itself, which CBS News Bob Schieffer categorized as "nasty," Carville says, "I suspect, at some point, that both sides are just going to have to pull back on the intensity a little bit, because it's going to be hard to sustain over a period of time -- although it's been intense for a long time."

"Lu and the Swamp Ghost" is published by Simon and Schuster, owned by Viacom, CBS' parent company.

Some facts about James Carville