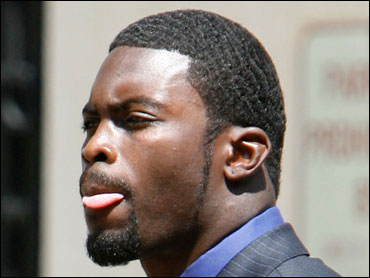 Less than a month after saying he looked forward to clearing his name, Michael Vick now acknowledges the heinous acts associated with his name are true.

The Atlanta Falcons quarterback said through a lawyer Monday that he will plead guilty to federal dogfighting conspiracy charges, an admission that likely will mean prison time.

Vick may never play anywhere in the NFL again, reports CBS News correspondent Mark Strassmann. If he put up most of the gambling money, as his co-defendants claim, the NFL could ban him for life.

But for now, any hopes of salvaging his NFL career are secondary to his impending confinement.

"His focus is on his family, his focus is on answering to this judge," Vick's lead defense attorney, Billy Martin, told The Associated Press after announcing the plea agreement Monday.

U.S. District Judge Henry Hudson can sentence Vick to up to five years in prison and fine him $250,000, although federal sentencing guidelines will call for less. A government official, speaking on condition of anonymity because the terms are not final, told the AP that prosecutors will recommend a sentence of a year to 18 months.

The official said such a sentence would be more than what is usually recommended for first-time offenders, reflecting the government's attempt to show that animal abusers will receive more than a slap on the wrist.

Vick will return Monday to the same courthouse where he pleaded not guilty and resolved to prove his innocence just 25 days ago. This time he will plead guilty, and Hudson will schedule a date for sentencing.

Since that initial court appearance, all three of Vick's co-defendants have pleaded guilty and agreed to cooperate in the government's case against him, including testifying against him if the case had gone to trial in November as scheduled.

The co-defendants said Vick bankrolled virtually the entire "Bad Newz Kennels" operation in rural southeastern Virginia, including providing gambling funds, an act that could trigger a lifetime ban from the NFL under the league's personal conduct policy.

Two of them also said Vick participated in the brutal executions of at least eight underperforming dogs.

Facing those allegations and the prospect of a superseding indictment from a new grand jury that began meeting Monday, Vick opted to change his plea.

"Mr. Vick has agreed to enter a plea of guilty to those charges and to accept full responsibility for his actions and the mistakes he has made," Martin said in a statement. "Michael wishes to apologize again to everyone who has been hurt by this matter."

Even with his plea deal, Vick's legal troubles still aren't over, reports Strassman. That just takes care of business with the feds; state prosecutors in Virginia say they plan to bring their own charges against Vick for dogfighting sometime late next month.

The NFL noted in a statement that Vick's admission wasn't in line with what he told commissioner Roger Goodell shortly after being charged.

"We totally condemn the conduct outlined in the charges, which is inconsistent with what Michael Vick previously told both our office and the Falcons," the NFL said.

The league, which barred Vick from training camp, said it has asked the Falcons to withhold further action while the NFL's own investigation wraps up.

The Falcons said they were "certainly troubled" by news of the plea, but would withhold further comment in compliance with Goodell's request.

Vick's Atlanta attorney, Daniel Meachum, told the AP that Vick is taking a chance with his guilty plea as far as his career is concerned because there have been no discussions with the league in recent days.

"There's no promise or even a request of the league to make a promise," Meachum said.

Gene Upshaw, executive director of the NFL Players Association, said in a statement:

"We believe the criminal conduct to which Mr. Vick has pled guilty today cannot be condoned under any circumstances. Speaking personally, as I have previously stated, the practice of dog fighting is offensive and completely unacceptable. I can only hope that Mr. Vick, who is young man, will learn from this awful experience."

Martin said Vick is paying a high price for allowing old friends to influence his behavior, but he emphasized that his client takes full responsibility.

"There were some judgment issues in terms of people he was associating with," Martin said in a telephone interview. "He realized this is very serious, and he decided to plead so he can begin the healing process."

Animal-rights activists said they hoped the high-profile case would increase public awareness and help bring down other dogfighting rings.

"The only good that can come from this case is that the American people dedicate themselves to the task of rooting out dogfighting in every infected area where it thrives," said Wayne Pacelle, president and CEO of the Humane Society of the United States.

Quanis Phillips of Atlanta, Purnell Peace of Virginia Beach and Tony Taylor of Hampton have pleaded guilty to the same charges facing Vick: conspiracy to travel in interstate commerce in aid of unlawful activities and conspiracy to sponsor a dog in an animal fighting venture. Phillips and Peace will be sentenced Nov. 30, Taylor on Dec. 14.

The case began April 25 when investigators conducting a drug search at a massive home Vick built in Surry County found 66 dogs, some of them injured, and items typically used in dogfighting. They included a "rape stand" that holds aggressive dogs in place for mating and a "breakstick" used to pry open a dog's mouth.

Vick contended he knew nothing about a dogfighting operation at the home, where one of his cousins lived, and said he rarely visited. The former Virginia Tech star also blamed friends and family members for taking advantage of his generosity and pledged to be more scrupulous.

The July 17 indictment said dogs that lost fights or fared poorly in test fights were sometimes executed by hanging, electrocution or other brutal means. The grisly details fueled public protests against Vick and cost him some of his lucrative endorsement deals.