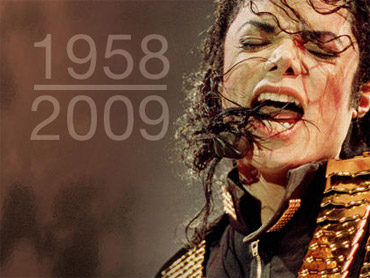 Here are 2009's top entertainment stories as voted by U.S. newspaper and broadcast editors surveyed by The Associated Press.

1. MICHAEL JACKSON DIES: On June 25, Jackson was pronounced dead at the age of 50. One of the most momentous and shocking deaths in pop culture history, the event reverberated in many ways. There was the ongoing investigation: Jackson's death was ruled a homicide, and his personal physician, Dr. Conrad Murray, who says he's innocent of wrongdoing, is being investigated for manslaughter. There was the gigantic Los Angeles funeral. There was the documentary, "This Is It," of Jackson's preparations for a comeback concert series. But, perhaps most of all, there was the celebration of his music, on stages and sidewalks the world over.

2. SUSAN BOYLE BECOMES OVERNIGHT SENSATION: Two 21st-century powers - reality TV and the Web - combined to turn the humble, unknown Boyle into an international star. After Boyle sang "I Dreamed a Dream" on "Britain's Got Talent" on April 11, the clip spread like wildfire online, totaling more than 120 million views on YouTube. Her album, released in November, had the best opening week sales of a female debut in decades.

3. LATE-NIGHT SWAP: On NBC, Conan O'Brien took over the "Tonight" show, and Jay Leno moved to 10 p.m. All the fanfare may have been overdone, though: At year's end, neither was receiving good ratings.

4. WALTER CRONKITE DIES: The passing on July 17 of Cronkite, a paragon of journalism and a father figure to a nation, was not only the sad loss of a universally acknowledged great man but was a reminder of a bygone era in broadcasting.

5. DAVID LETTERMAN AFFAIR: Letterman's Oct. 1 announcement on his "Late Show" carried two bombshells: He alleged that he had been the victim of an extortion attempt, and he confessed to having affairs with women on his staff. Letterman, who hasn't shied from the subject on air, saw some of his best ratings in years. The man accused of trying to blackmail Letterman, Robert J. "Joe" Halderman, says he was just shopping a screenplay.

6. CHRIS BROWN ASSAULTS RIHANNA: The big story on Grammy night in 2009 didn't take place on stage but outside the ceremony. Chris Brown assaulted then-girlfriend Rihanna, an altercation that led to Brown pleading guilty to felony assault in June. Both R&B stars were in comeback mode before the year was out, releasing new albums just weeks apart.

8. LIVE VIDEO EXPLODES ON THE WEB: One of the biggest trends in online video was the emergence of demand - and supply - for live video. Live online video particularly suited daytime news events (when people are at work in front of computers). Millions online watched the inauguration of President Barack Obama and the funeral of Michael Jackson.

9. KATE AND JON GOSSELIN BROADCAST SPLIT: One of reality TV's latest sensations fell apart just as it was reaching fruition. TLC's "Jon & Kate Plus 8" was winning its best ratings in its fifth season when the Gosselins - parents of eight children - announced their separation. With more than 10 million viewers, that episode earned the show its best ratings. Arguments in the divorce, which became final in December, have thus far prevented the show from continuing. TLC hopes to debut a show for Kate Gosselin in the spring.

10. HEATH LEDGER WINS POSTHUMOUS OSCAR: Ledger, whose death topped the poll of 2008's top entertainment stories, remained a presence in 2009, when he won an Oscar for best-supporting actor for his performance as the Joker in "The Dark Knight."