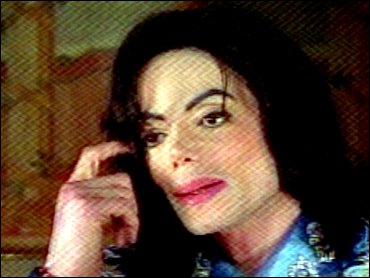 In his first interview since his arrest on child molestation charges, Michael Jackson tells Ed Bradley the charges against him are motivated by money, and says he shared a bed with a grown man many times when he was a boy.

He also says police deliberately injured him and humiliated him by locking him in a feces-covered men's room during his arrest.

The pop star says it's still okay to share his bed with children.

He says that while he was in police custody, officers locked him in a feces-smeared bathroom for 45 minutes in order to belittle him and take away his pride.

"There was doo doo - feces - thrown all over the walls, the floor, the ceiling," he tells Bradley. "And it stunk so bad. Then one of the policemen came by the window. And he made a sarcastic remark... 'How do you like the smell? Is it good?' And I just simply said, 'It's alright. It's okay.' So, I just sat there, and waited."

He also says the police handcuffed him in such a way so as to hurt his back. "Now I can't move," he tells Bradley, and the injury "keeps me from sleeping at night. I can't sleep at night."

But he vehemently denies the charges against him. An impassioned Jackson says, "Before I would hurt a child, I would slit my wrists," in reaction to a Bradley question about the charges brought against him that he molested a young boy.

When Bradley asks Jackson if he would allow his own children to sleep in a bed with a grown man who was not a relative, or to sleep in that man's bedroom, Jackson replies, "Sure, if I know that person, trust them, and love them. That's happened many times with me when I was little."

Jackson also says he does not blame the youngster involved in the case for bringing the accusations against him. Instead, he said, "Somewhere, greed got in there, and somebody…I can't quite say. But it has to do with money. 'It's Michael Jackson. Look what we have here. We can get money out of this…' That's exactly what happened."

When Bradley asks him why a child would accuse Jackson of sexual molestation if it weren't true, Jackson replies, "Because parents have power over children. They feel they have to do what their parents say. But the love of money is the root of all evil. And this is a sweet child. And to see him turn like this, this isn't him. This is not him."

Jackson says people will believe the worst about him "if they have a sick mind. And if they believe the trash they read in newspapers."

He adds, "Just because it's in print doesn't mean it's the gospel. People write negatives things, cause they feel that's what sells."

Jackson also says that the police search of Neverland Ranch was overdone and so violated his privacy that his home will never be the same.

He tells Bradley, "I won't live there ever again. It's a house now. It's not a home anymore. I'll only visit."

The interview took place on Christmas night in a Los Angeles hotel. The pop star has been charged with performing lewd acts with a child under 14.