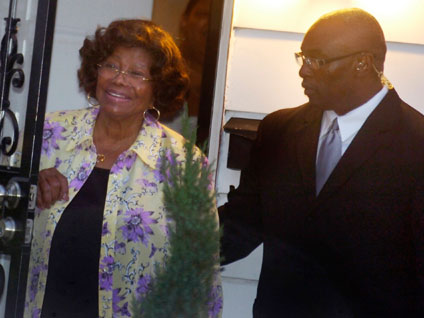 GLENDALE, Calif. (CBS/AP) Members of Michael Jackson's family have arrived at the California cemetery where he is interred.

Tito Jackson shook the hands of a few of the fans waiting to pay respects to his late brother at Forest Lawn Cemetery on the one-year anniversary of the pop icon's death.

Hundreds of fans have filed past barricades to get close to Jackson's mausoleum. Some wept. Mourners carried bouquets, and some wore Jackson T-shirts or his signature sparkling gloves and fedora hats.

Fans started gathering at Forest Lawn on Thursday evening. Five large wreaths of flowers and dozens of bouquets, drawings and photos of Jackson had been placed outside his private mausoleum.

In Gary, Ind., Jackson's hometown, hundreds of fans began gathering this afternoon for a tribute at the family home, where loadspeakers set up outside were playing his music. The singer's mother, Katherine, is in the city for the event. His niece, Genevieve Jackson, is also scheduled to attend.