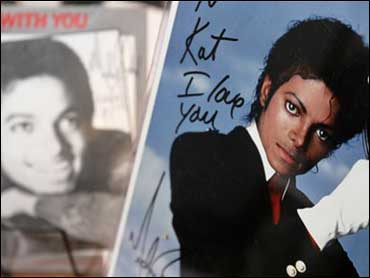 Lawyers for Michael Jackson on Friday dropped an effort to block an auction of the pop star's personal belongings and other Jackson family items.

Jackson didn't appear in a Las Vegas court where his lawyer told a judge a confidential agreement had been reached with representatives of an auctioneer, the current owner of the materials, and a New Jersey man who claimed a warehouse full of Jackson memorabilia after a failed business venture wound up in bankruptcy court.

Lawyers declined to describe terms of the agreement, which settled an April 27 lawsuit.

Jackson sought to prevent the auction and force the return of items he claimed were personal property, court documents show. The entertainer also had sought unspecified punitive damages.

Universal Express Inc., the Boca Raton, Fla., luggage transportation company that owns the items, claimed the materials were worth about $50 million, according to court records.

Arlan Ettinger, president of Guernsey's auction house of New York, said outside the courtroom that the auction will go on as scheduled May 30-31 at the Hard Rock hotel in Las Vegas.

Jackson, 48, has been living in Las Vegas while he evaluates proposals for a comeback after his 2005 acquittal in California on charges of child molestation.