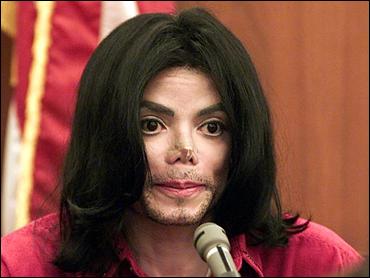 Michael Jackson filed complaints with two TV watchdogs Thursday over a controversial documentary about his life, during which the King of Pop revealed he sometimes lets children sleep in his bed.

Jackson, who said he felt betrayed by the "terrible" documentary, had his lawyers file the complaints with Britain's Independent Television Commission and the Broadcasting Standards Commission, saying he had been "unfairly treated" by the program.

His legal team also claimed that "Living With Michael Jackson," which was broadcast in Britain on Monday was an infringement of his privacy. The program was scheduled to air Thursday night on ABC's "20/20."

The complaint filed with the Independent Television Commission alleged the documentary "contains the clear innuendo that Mr. Jackson is guilty of inappropriate behavior with children." It said the show's voiceovers, questions and editing gave credence to allegations made against him in 1993 of a sexual offense against a child.

In the complaint filed with the Broadcasting Standards Commission, Jackson said he was not given any prior warning of the narrator's intent to interview him about the 1993 incident or to question the legality of his current relationships with children.

The singer also said his own children were improperly filmed and he wasn't allowed to see the documentary, as promised, before it was broadcast.

The watchdogs have the power to censure offending broadcasters.

In 1993, Jackson was accused of molesting a boy who had stayed at his home. He denied the allegations and reached a financial settlement with the boy's family. No charges were filed.

In a statement issued earlier Thursday by his London representative, Jackson said British journalist Martin Bashir, who spent eight months making the 90-minute program, broke the trust placed in him, and added he felt "more betrayed than perhaps ever before."

"I trusted Martin Bashir to come into my life and that of my family because I wanted the truth to be told," Jackson said in the statement, released by his London representative Stephen Lock.

"Today I feel more betrayed than perhaps ever before; that someone who had got to know my children, my staff and me, whom I let into my heart and told the truth, could then sacrifice the trust I placed in him and produce this terrible and unfair program," Jackson said.

"Everyone who knows me will know the truth which is that my children come first in my life and that I would never harm any child."

Granada, the television company behind the documentary, said the program was "a truthful, open and intimate portrayal of many aspects of Michael Jackson's extraordinary life."

"There has been no distortion, misrepresentation or breach of trust. Martin Bashir agreed with Michael that we'd make an honest film about his life and we've fulfilled that promise," Granada said in a statement.

British tabloids have used the broadcast to criticize Jackson, but not all the fallout was bad. Jackson said he had received many messages of support from fans in Britain since the documentary was aired.

In California's Santa Barbara County, where Jackson's Neverland ranch is located, District Attorney Thomas W. Sneddon, Jr., condemned the "media circus" around the documentary and called Jackson's admission that he has slept in the same bed as children "much ado about nothing."

"Sleeping in bed with a kid is not a crime that I know of," Sneddon told the Santa Barbara News-Press.

Record stores in Britain reported a surge in sales of Jackson's records. Virgin Megastores said sales of his 1982 "Thriller" album were up 473 percent from last week, while the greatest hits package "HIStory" was up 383 percent - sending both albums into the lower reaches of the chain's Top 100 chart.

When Bashir asked Jackson about his friendships with children, Jackson said: "I have slept in a bed with many children," including actor Macaulay Culkin and his brother Kieran.