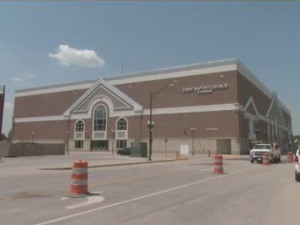 (CBS) CHICAGO - Jack Schaap, a pastor at First Baptist Church of Hammond, Ind., who admitted to having a sexual relationship with a 17-year-old member of the church, was fired on Wednesday, according to CBS Chicago, citing officials from the church.

At a meeting with congregants Wednesday night, church officials revealed that Schaap, 54, was being investigated for misconduct with a 17-year-old girl.

Terry Duff, chairman of the church's Board of Deacons, said he confronted Schaap, who admitted that he was having a relationship with a 17-year-old member of the congregation, according to CBS Chicago.

Officials offered no other details, except to say that local and federal police officers were investigating the matter.

"He had an inappropriate relationship with a minor, and that's all I can say at this time," Duff told CBS Chicago.

Duff also had "no idea at this time" whether or not Schaap had inappropriate relations with any of the other young members of the church.

"That's why we're asking anybody, anybody who has information to please come forward and let us know," Duff told CBS Chicago.

Eddie Lapina, Interim Pastor, has worked extensively with the youth ministry and said he never saw any evidence of inappropriate conduct, according to CBS Chicago.

Yet, he warned that Schapp "has suffered greatly thus far, and if there...have been criminal acts, then the law will take that into account as well."

Schapp, who's married to the daughter of the late founder of the church, had been pastor at First Baptist for 11 years. The church, located in the Chicago metropolitan area, has grown to 40,000 members worldwide and has 15,000 people attending Sunday services each week.

The age of consent in Indiana is 16. Authorities are investigating whether or not Schaap went across state lines into Illinois, where the age of consent is also 16, Eddie Wilson, director of public relations of the Church, told Reuters.

Schaap is said to be trying to reconcile with his wife, according to CBS Chicago.