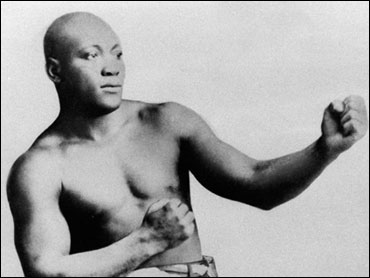 (AP Photo)
White House spokesman Robert Gibbs indicated today that the White House is not pushing for a pardon of Jack Johnson, the African-American boxer who many believe was sentenced to prison time in 1913 primarily because of his romantic involvement with white women.

Johnson, who died in 1946, was an outspoken opponent of segregation. He served ten months in prison for violating the Mann Act, which made it illegal to cross state lines with a woman for "immoral purposes."

Sen. John McCain (R-Ariz.) and Rep. Peter King (R-N.Y.) championed a resolution earlier this year seeking a pardon of Johnson. It passed both houses of Congress but the Justice Department rejected the effort earlier this month, saying that the department does not traditionally pardon the deceased.

In its response, Justice said it prefers to focus its pardon resources on people "who can truly benefit" from them.

Last week, the lawmakers wrote a letter to President Obama saying they were "sorely disappointed" in the decision and further pressing the case. They asked the president to break with the Justice Department, as is his right, and "concur with Congress and swiftly issue a posthumous pardon for Mr. Johnson."

"In terms of Jack Johnson, I think the Department of Justice came back recommending -- not recommending a pardon on that," he said.