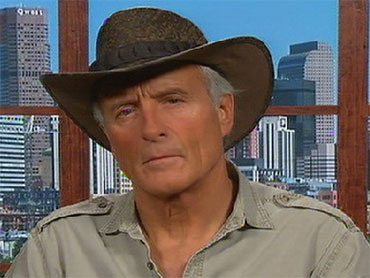 Following the tragic death of Dawn Brancheau, a trainer at SeaWorld who died after being drowned by a killer whale named Tilikum, wildlife expert Jack Hanna, who knew Bancheau, said he still supports SeaWorld and their decision to keep the killer whale, despite its past with two human deaths.

"I take my hat off to SeaWorld to take a killer whale that someone said we should euthanize, (and) bring it to SeaWorld," Hanna said.

Hanna added that no trainer ever swam with Tilikum in the history it was at SeaWorld.

He said, "Tilly had youngsters with it because it was socialized with females there, so the value that Tilly has is insurmountable compared to --What happened is terrible, but -- "

"Early Show" co-anchor Maggie Rodriguez interjected, "But it killed another trainer after already having killed one years ago."

Hanna agreed, but compared working with these animals to going into outer space. He said the risk of keeping these whales in captivity is worth the risk for posterity's sake.

"This is the type of work that we do," he said. "We do everything we can (to put) the safety of our animals and visitors first. The SeaWorld in-vitro planted, they can now take sperm and eggs and have a baby killer whale. Let's say 20, 30 years from now, there's 200 killer whales left in the wild. Let me tell you where we're going to go: We're going to go to SeaWorld and see what to to save this magnificent creature. That's how valuable it is for what we're doing with research. I hear all these other people commenting with killer whales. Give me a break. Seaworld are the ones that know more about killer whales, and the millions of dollars they spend this rescuing whales is unbelievable. And we put them back out in the wild. So no one hears about this."

But at what point does a whale get too big to be in captivity?

"I don't know, you know," Hanna responded. "Some people said they know what the whale thinking. That's impossible. I don't know what the whale is thinking I don't know what stress is to a whale. All I know is that SeaWorld provides the best possible care, and I've in been going to those parks for 30-something years. And I always seen nothing but animals that seem to be very, very happy. That's all I know from what I see as a person that's been in the business 40 years."

Hanna, who worked occasionally with Bancheau for his wildlife show, said the aquarium and zoo world is still in shock.

"We're such a small family and when you lose somebody I still can't believe that a beautiful person like Dawn who people so admired, who I compare to really like an astronaut or an Olympic athlete. She was the best there was at what she did. And my heart goes out to them."

Hanna said the wildlife work Brancheau did was her legacy, and that it should be kept alive.

For more with Hanna, click on the video below.