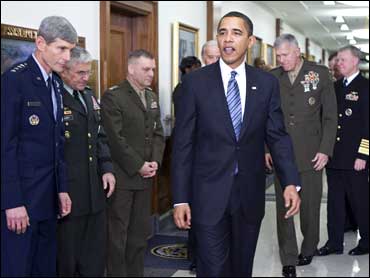 The man who two-and-a-half months ago was a junior Senator from Illinois, made his first visit Wednesday to the Pentagon as Commander-in-Chief.

With the help of police, who shut down traffic in both directions on Constitution Ave. and the Memorial Bridge over the Potomac, President Barack Obama made the trip from the White House to the River Entrance of the Defense Department in ten minutes flat.

He was escorted to "The Tank" - nickname of the secure conference room of the Joint Chiefs of Staff where he spent longer than expected, almost two hours, discussing his plans to withdraw most U.S. forces from Iraq and send more American troops to Afghanistan.

"I had a wonderful discussion with the Joint Chiefs," said the President upon emerging from the talks, "we kind of lost track of time."

He conceded there are "difficult decisions" to be made "almost immediately" about strategy in Iraq and Afghanistan.

"Our efforts to continue to go after extremist organizations that would do harm to the homeland is uppermost on our minds." Worth noting: he said "extremist" not "terrorist."

Waiting to meet the new Commander-in-Chief in the corridor outside "The Tank" were about 60 uniformed military personnel - most of them non-commissioned officers, from all branches of the armed forces.

"Very nice to see you - thanks for your service," Mr. Obama was heard saying to a number of them. He asked the troops where they were from and spoke to one woman about her pregnancy.

For the second time today, the man from the Windy City felt compelled to ridicule Washington area schools for shutting down because of icy road conditions this morning.

"Aren't you a little surprised that they canceled school for my kids?" he asked one of the troops.

Earlier in the day, he said "that when it comes to the weather - folks in Washington don't seem to be able to handle things."

"We're gonna have to try to apply some flinty Chicago toughness to this town," he said.

As Commander-in-Chief, he can't order local schools to stay open in bad weather so that his daughters don't have to stay at home, but he made it clear he can make sure the U.S. military has "the resources and the support they need to carry out the critical missions that keep our nation safe each and every day."

He also made the charge that for a long time the nation has put enormous pressure on the military to carry out a whole set of missions, but wasn't supplying the "strategic support" needed. "And that's something that I spoke with the Chiefs about and that I intend to change as President of the United States."

Reporters didn't get to enter "The Tank," but did spend a few minutes in the Joint Chiefs Dining Room. It's decorated with the flags and insignias of the Army, Navy, Marines and Air Force. The artwork on the walls shows various military scenes including an F-14 on the deck of an aircraft carrier, Marines in the desert of Iraq and a Coast Guard chopper plucking someone out of the sea.

And if Mr. Obama's popularity took a hit today in D.C. because of his comments suggesting locals were wimps about bad weather, it wasn't helped any on his drive back to the White House.

At the height of rush hour, traffic was blocked on key thoroughfares so his motorcade could get him home quickly. Every president does it - and Washington motorists always resent it - no matter who the President is.