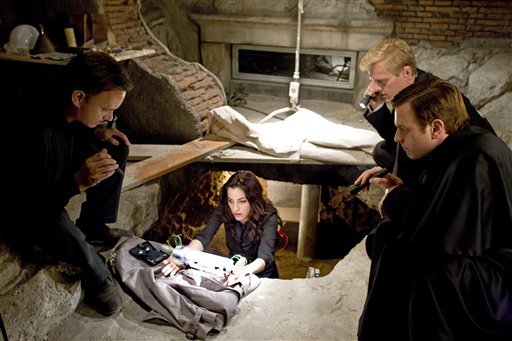 Chancellor Gerhard Schroeder declared a diplomatic crisis with Italy over after Premier Silvio Berlusconi apologized Thursday for saying a German member of the European parliament would make a good Nazi concentration camp guard in a movie.

Berlusconi "expressed his regret about the choice of this expression and comparison," Schroeder told reporters at the chancellery after speaking to Berlusconi by telephone.

Schroeder had earlier demanded an apology, saying the comparison was "completely unacceptable."

Berlusconi — back in Rome after the flap he caused a day earlier as his country took the presidency of the European Union — was to speak later Thursday with Schroeder by telephone and said he expected the issue would be resolved.

Berlusconi's allies had blocked an effort for the European Parliament to formally demand an apology for his comments, as the conservative leader blamed Italy's leftist opposition for the uproar.

Berlusconi's jibe was directed at a Social Democratic member of the European Parliament during an appearance Wednesday to mark the start of Italy's six-month presidency of the European Union.

The European parliamentarian, Martin Schulz, referred during a question-and-answer session to the Italian leader's use of an immunity law to sidestep bribery charges in an Italian court.

"Mr. Schulz, I know there is a producer in Italy who is making a film on the Nazi concentration camps. I will suggest you for the role of kapo," Berlusconi snapped back. "You'd be perfect."

The German word "kapo" is usually taken to mean a concentration camp guard drawn from the ranks of the prisoners.

Within hours, the uproar in the European Parliament led to tit-for-tat diplomatic complaints in Berlin and Rome.

In Rome, the Italian Foreign Ministry responded in kind, summoning the German ambassador in Rome, Klaus Neubert, to say Schulz's comments "constituted a grave, unacceptable offense to the dignity" of Berlusconi and all Italian and European institutions.

But a ministry statement also said that undersecretary Giuseppe Baldocci told Neubert that Berlusconi's comments "certainly weren't intended to offend the German people or hurt their sensibility," and that the premier "was sorry that his response was interpreted differently by some."

The uproar was front-page news Thursday in Italy and Germany, where commentators across the political spectrum condemned Berlusconi and questioned his fitness to speak for Europe.

Others backed Berlusconi, including the conservative daily Il Foglio.

"The premier did well to give the title of kapo to Mr. Schulz, a socialist deputy who treated him like a classroom delinquent," wrote commentator Giuliano Ferrara, a frequent Berlusconi defender.

Schulz, a social democrat like Schroeder, said in an interview Thursday in the Italian daily La Stampa that he rejected Berlusconi's explanation that the remark was meant to be lighthearted.

"Suffice it to say that Berlusconi would do best to resign," Schulz told the paper.

Berlusconi on Thursday blamed Italy's leftist opposition for the furor, saying his political foes created a political climate that prompted the testy exchange with Schulz. "It was adequately prepared by the opposition," the premier said in Rome.

Berlusconi also drew scrutiny Thursday for his near total control of his country's television stations. A Danish member of the 45-member Council of Europe said the continent's top human rights watchdog should investigate freedom of the press in Italy.

"I am worried about what happens in Italy, about the media concentration," Hanne Severinsen said in Denmark.

The Nazi remark is not the first time Berlusconi's sharp tongue has raised hackles in Europe. He has said that communists eat babies and implied that Finns had little appreciation of good food.