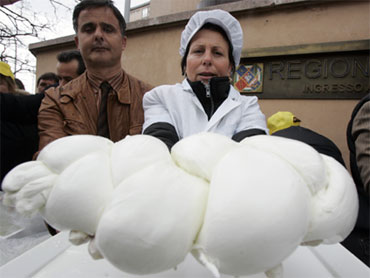 Thousands of Italian farmers and farm activists massed at Italy's border with Austria on Tuesday to protest the importation of what they called sub-quality foods pretending to be from Italy.

The protest at the Brenner Pass through the Alps was sparked by the blue mozzarella scandal, in which imported batches of the creamy white cheese, a food Italians consider one of their country's hallmarks, turned blue because of bacterial contamination.

Last month, police seized over a ton of imported mozzarella from store shelves after reports surfaced around Italy that it began to turn blue after being taken out of its packaging. The cheese was made in Germany, by the firm Milchwerk Jager Gmbh & Co.

The health ministry in Rome said it has received no complaints of illness linked to the blue mozzarella, and the German manufacturer said a harmless germ found in groundwater was responsible for the blue hue of the cheese and had been filtered out starting in mid-May.

Still, Italy's agriculture minister and the main farm lobby Coldiretti were incensed that such carelessness had, in their opinion, harmed Italy's reputation as a quality food maker.

Although the mozzarella packages were marked as made in Germany, Milchwerk's mozzarella brands had Italian-sounding names, such as Fattorie Torresina, Lovilio and Monteverdi.

Coldiretti says mozzarella is the most-purchased cheese in Italy, with Italians consuming 164 million kilograms (360 million pounds) a year, either to top off their pizzas or for use in caprese salads - the popular summer salad of mozzarella, tomato and basil.

During Tuesday's protest, border police inspected trucks bringing milk, meat and other products into Italy as farmers waving the yellow and green banners of Coldiretti cheered.

"We want to know what is coming and where it's going," Coldiretti said in a statement. "People who buy have the right to know if what they're buying is really made in Italy."

Agriculture Minister Giancarlo Galan attended Tuesday's protest, saying he would press for new legislation requiring milk producers to give more details about the provenance of their milk. The proposed bill passed the upper Senate chamber but has not passed the lower Chamber of Deputies.