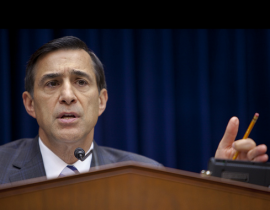 (CBS News) Rep. Darrell Issa, the chair of the House oversight committee, is accusing the Department of Justice (DOJ) of failing to fully cooperate in the ongoing investigation of the for the so-called "Fast and Furious" gunwalking operation by likening the situation to the Samuel Beckett play "Waiting for Godot" -- in which, famously, nothing happens.

"For those of us on the Committee, waiting for the Department to move off its misguided position and produce the documents we seek has been like waiting for Godot," Issa wrote in a Thursday letter to U.S. Attorney General Eric Holder, who is at the center of the investigation. "Like Vladimir and Estragon, we held out hope despite mounting evidence that nothing is going to show up. We cannot wait any longer."

"Waiting for Godot" is about two characters, Vladimir and Estragon, who spend the entire play waiting in vain for the character Godot to show up.

The DOJ has provided more than 7,600 pages worth of documentation to the House committee, but Issa argued that a number of documents were withheld and that many of those that were provided have been "heavily redacted, to the point that the redactions were laughable."

A spokesperson for the DOJ referred to a May 3 letter disputing the accusations.

"The Department strongly disputes the contention that we have failed to cooperate with the Committee's review of Operation Fast and Furious," the letter, addressed to Issa from Deputy Attorney General James Cole, reads.

In February 2011, CBS News Investigative Correspondent Sharyl Attkisson reported that an operation called "Project Gunrunner," run by the Federal Bureau of Alcohol, Tobacco and Firearms (ATF), had resulted in agents letting thousands of guns "walk" into the hands of suspected traffickers for Mexican drug cartels. While the operation aimed to take down a major cartel, two of those weapons turned up at the murder of Border Patrol Agent Brian Terry last December.

The Oversight committee has since been investigating the matter, also known as "Fast and Furious," with Issa repeatedly suggested that Holder has been withholding facts pertaining to the case. Last week, Republicans on the oversight committee indicated they would take the first formal step toward contempt proceedingsagainst Holder for allegedly obstructing the committee's investigation, which is now in its second year.

"Fortunately for us, the Department of Justice is not the arbiter of what the Committee's legitimate oversight interests are," Issa wrote in his letter. "There is a mechanism for resolving cases that challenge the limits of the congressional prerogative. The contempt process is part of that mechanism. The Department's unwillingness to recognize that an investigation into Fast and Furious is in fact a legitimate oversight interest signals we have reached an impasse and that contempt proceedings are necessary."

House Speaker John Boehner yesterday said he would not take a contempt resolution off the table, and said he would support the committee's pursuit of "a lot of unanswered question."

"I'm supporting their efforts to hold those people in the Department of Justice accountable for what happened," he said at a press conference Thursday. "The committee has work to do; they know what they have to do. They're pursuing a lot of unanswered questions. And I would hope that they would continue that."