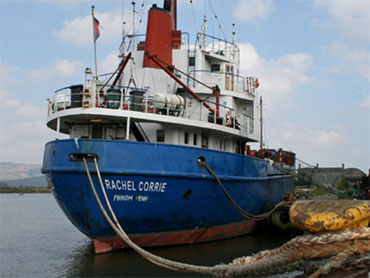 Israeli forces seized a Gaza-bound aid vessel swiftly and without meeting resistance on Saturday, preventing it from breaking a naval blockade of the Hamas-ruled territory days after a similar effort turned bloody.

Israel has faced mounting international pressure to lift the blockade since Monday's deadly confrontation aboard a Turkish aid vessel headed for Gaza. But it stood by the embargo — which it says is needed to prevent the Islamic militant group from getting weapons — even as the Obama administration called the current restrictions "unsustainable."

Prime Minister Benjamin Netanyahu defended the blockade in remarks following the takeover, saying it was meant to keep weapons out of the hands of the Iranian-backed Hamas and he would "not allow the establishment of an Iranian port in Gaza."

The 1,200-ton Rachel Corrie, which was carrying 11 pro-Palestinian activists, nine crew and hundreds of tons of aid, was intercepted in international waters, about 20 miles from Gaza's shore and was being escorted to the nearby Israeli port of Ashdod, the military said.

Military spokeswoman Lt. Col. Avital Leibovich said Saturday's takeover took just minutes, and the ship's captain had gathered the passengers in one area of the vessel, presumably to avoid violence. Footage provided by the Israeli military from an aircraft hovering above the Rachel Corrie showed the activists sitting down in the middle of the top deck.

She said commandos clambered onto the boat by sea, instead of descending from helicopters as occurred on Monday when nine activists were killed.

Communications to the Rachel Corrie had been cut earlier in the day, so satellite phones weren't operating during the takeover and activists weren't reachable. Israeli warships had tailed the boat since early morning, determined not to let it reach Gaza despite the international outrage over the earlier violence.

Greta Berlin, a spokeswoman for the Free Gaza group that organized the trip, described the takeover as "another outrage to add to the nine murdered" and denied Israeli claims that troops had been invited aboard. Berlin spoke from the group's office in Cyprus.

The Rachel Corrie, whose passenger list included Nobel peace laureate Mairead Corrigan, had hoped to breach a 3-year-old blockade that has plunged Gaza's 1.5 million residents deeper into poverty. But activists on board the Irish boat had insisted they would not resist if Israeli soldiers tried to take over their vessel.

The Israeli navy established radio contact with the vessel four times, before boarding it, and urged it to sail to Ashdod instead of Gaza, the military said. Israel has offered to inspect the cargo and send items permitted under its blockade rules to Gaza overland.

The navy officers addressed the boat as "Linda" — the Cambodian-flagged vessel's name before it was renamed for an American college student who was crushed to death by a bulldozer in 2003 while protesting Israeli house demolitions in Gaza.

The outcry over the aid ships has been a public relations nightmare for Israel, while giving Hamas a welcome boost and vastly improving prospects of at least easing the closure of the territory.

Israel has allowed ships through five times, but has blocked them from entering Gaza waters since a three-week military offensive against Gaza's Hamas rulers in January 2009.

Israeli Foreign Ministry spokesman Yigal Palmor said Saturday that Israel would continue to enforce the blockade as long as Gaza's Hamas rulers don't meet conditions for international acceptance, including a renunciation of violation and recognition of Israel.

However, critics note that weapons continue to enter the territory through underground tunnels with Egypt and decry the increased hardship the embargo has caused ordinary Gazans.

Egypt has helped enforce the blockade on land, but President Hosni Mubarak ordered the passenger terminal with Gaza to open daily, instead of sporadically, following Monday's raid.

The Obama administration had adopted a gradual approach of persuading Israel to ease restrictions but said Friday it was working "urgently" with Israel, the Palestinian Authority and other international partners to develop new procedures for delivering more goods to Gaza while blocking the entry of weapons.

"The current arrangements are unsustainable and must be changed," National Security Council spokesman Mike Hammer said.

This latest attempt to breach the blockade differed significantly from the flotilla the Israeli troops intercepted on Monday, killing eight Turks and a Turkish-American after being set upon by a group of activists. That raid has sharply raised tensions between Israel and its once-close ally Turkey.

In Turkey, an official autopsy report said a preliminary examination revealed that the nine men were shot a total of 30 times, and five of them were killed by gunshots to the head and their backs. One of the activists was shot to death from close range, it said.

The autopsy report will be sent to the prosecutor's office in Istanbul in the next two months as evidence to be used against Israel in a possible court case, the state-run Anatolia news agency said.

Nearly 700 activists had joined that earlier operation, most of them aboard the lead boat from Turkey that was the scene of the violence. That boat, the Mavi Marmara, was sponsored by an Islamic aid group from Turkey, the Foundation for Human Rights and Freedom and Humanitarian Relief. Israel outlawed the group, known by its Turkish acronym IHH, in 2008 because of alleged ties to Hamas. The group is not on the U.S. State Department list of terror organizations, however.

By contrast, the Rachel Corrie — loaded with wheelchairs, medical supplies and cement — was carrying just 11 passengers from Ireland and Malaysia, whose effort was mainly sponsored by the Free Gaza movement, a Cyprus-based group that has renounced violence.

Palmor said the cargo would be inspected in Ashdod and permitted goods could be transferred to Gaza. The import of cement has been sharply restricted, but Palmor said some could be sent to the territory in coordination with the United Nations.

Hamas has said it would refuse to accept any aid from the Israeli-intercepted flotilla as long as the blockade remained in place.