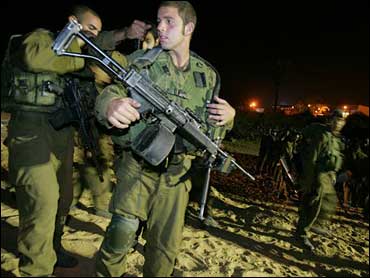 Israeli troops entered southern Gaza and planes attacked three bridges and a power station, knocking out electricity in most of the coastal strip early Wednesday and stepping up the pressure on Palestinian militants holding captive a 19-year-old Israeli soldier.

Israeli troops began taking up positions in two locations east of the Gaza town of Rafah under the cover of tank shells, according to witnesses and Palestinian security officials. Palestinians dug in behind walls and sand embankments, bracing for a major Israeli offensive.

The Israeli strikes came amid intensive diplomatic efforts in the Arab world and by the United Nations. Secretary of State Condoleezza Rice urged Israel to "give diplomacy a chance."

Israel may have felt that a swift response was necessary, reported CBS News correspondent Robert Berger. If it had waited too long, it may have feared that it would appear weak and its threats of a crushing military response would have no credibility.

Trying to defuse building tensions, negotiators from the ruling Hamas movement said Tuesday they had accepted a document implicitly recognizing Israel. But two Syrian-based Hamas leaders denied a final deal had been reached. Israel said only freedom for the captive soldier, Cpl. Gilad Shalit, could defuse the crisis, not a political agreement.

The group holding the soldier released a statement early Wednednesday threatening to kill a Jewish settler it claimed it was also holding unless Israel stops its military action.

The Israeli military said in a statement that the object of the attacks on the bridges late Tuesday and early Wednesday was "to impair the ability of the terrorists to transfer the kidnapped soldier." Knocking down the bridges cut Gaza in two, Palestinian security officials said.

Early Wednesday, Israeli planes fired at least nine missiles at Gaza's only power station, cutting electricity to much of the Gaza Strip, Palestinian security officials said. The station's three functioning turbines and a gasoline reservoir were engulfed in enormous flames that firefighters were unable to control.

The attack raised the specter of a humanitarian crisis in Gaza, as water pumps in the strip are powered by electricity. Some electricity in Gaza City was restored by tapping into electricity supplied by Israel in northern Gaza.

Masked militants from various armed factions took up defensive positions around Gaza City, instructing drivers to turn their headlights off. Militants from three armed factions said they fired a rocket early Wednesday at the Israeli village of Nahal Oz. No casualties were reported.

Israeli military officials said Prime Minister Ehud Olmert approved a "limited operation" for southern Gaza, aimed at "terrorist infrastructure." The officials spoke on condition of anonymity because they were not authorized to talk to reporters.

Palestinian security forces said Israeli tanks were on the move near Nahal Oz, a main Israeli staging area just outside Gaza, but that they had not yet entered the territory. An Associated Press reporter saw tanks moving on the Israeli side of the border fence.

Some Israeli troops crossed the border into southern Gaza, near the site of Sunday's militant attack in which Shalit was abducted. It was not immediately clear how many soldiers entered Gaza, though the army confirmed its soldiers were crossing the border. A number of Israeli soldiers had been in Gaza since Sunday's assault.

In the Shajaiyeh neighborhood of Gaza City, not far from the fence, armed militants took up positions across from the blaring headlights of Israeli vehicles, and Israeli attack helicopters hovered overhead. The roar of Israeli fighter planes reverberated throughout Gaza City.

The militants told residents to leave the area. They piled gasoline-soaked tires in the streets. Earlier, bulldozers blocked some of the main roads with piles of sand and dirt to try to slow down Israeli tanks.

There were no reports of casualties in the Israeli strikes.

White House press secretary Tony Snow said he had only seen media accounts of the Hamas-Fatah accord, but reiterated that Hamas had to meet three conditions before a crippling aid boycott could be lifted.

"Once again, we can all recite from memory now: recognize Israel's right to exist, renounce terror, and abide by all past agreements. Those are the preconditions," Snow said in Washington.

Complicating matters was a new claim by the Hamas-linked Popular Resistance Committees, one of the three groups that carried out Sunday's assault, that it had also kidnapped the Jewish settler in the West Bank. The group later issued the death threat.

The fate of the abducted soldier has riveted Israelis, with Shalit's face plastered on newspapers and callers to talk shows praying for his safety.

In an interview Tuesday with The Associated Press, Noam Shalit begged the captors of his wounded son's to provide medical care and asked "to hear his voice and to see his face."

Olmert rejected the kidnappers' demands to free Palestinian prisoners and instead approved plans for a military push into Gaza. About 3,000 soldiers, along with tanks and armored vehicles, massed along Israel's border with the territory, and commanders said they were awaiting orders to move in.

Hamas' Web site said there were "back channel" negotiations with Israel over a prisoner release.

Israeli military officials said a negotiating team has been activated, but declined to release further information.

The kidnappers did not say where Shalit was being held or release any photos of him. Israeli officials said they believed the soldier suffered light wounds to his stomach and was being held in southern Gaza.

On Tuesday, for the first time since Sunday's assault, in which two Israeli soldiers and two militants were killed, militants acknowledged they were holding Shalit and said he was alive.

"The soldier is in a secure place that the Zionists cannot reach," said Mohammed Abdel Al, spokesman for the Popular Resistance Committees. He said his group also took a West Bank settler hostage.

Mohammad Nazal, a Damascus-based member of the Hamas politburo, said the militant group would not agree to free the Israeli soldier "without a deal."

"No release without something in return," he told AP. "This is the popular demand and we cannot let down our people."

Egyptian officials said their government asked Hamas to release the soldier and deployed 2,500 extra soldiers along the border with Gaza to prevent an influx of Palestinians if Israel invaded. Egypt also imposed a nighttime curfew on residents along the border.