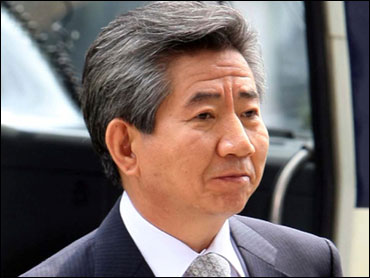 Backed by helicopter gunfire, dozens of Israeli tanks rolled into Gaza City late Tuesday in the second incursion in two days. Three Palestinians were killed and 20 people were wounded in exchanges of fire with Israeli forces, Palestinian hospital officials said.

The Islamic group Hamas claimed in a statement that a suicide bomber from Gaza City blew up one of the tanks. The Israeli military had no immediate comment.

The violence followed an Israeli decision to lift a quarantine on the West Bank and Gaza that had idled thousands of Palestinians who work in Israel, as Palestinian officials appealed for huge amounts of aid to rescue their conflict-battered economy.

The Israeli military would say that Tuesday's incursion was limited in nature, not an invasion of Gaza.

Witnesses said about 40 Israeli tanks headed for the Shajaiyeh neighborhood from three directions residents said, and several tanks also surrounded a Hamas elementary school in the nearby Tufah section. Soldiers blew up a metal workshop, one of the largest in the city, Palestinians said.

Iman Shamali, 39, said her house "shook like an earthquake" from the force of the blast, and she saw the tank burning outside. "Bullets are coming from all directions," she said. "It's a real war here."

Witnesses said an explosion set one of the invading tanks on fire, and in a statement, Hamas claimed responsibility, saying that a suicide bomber, Karim Batron, 21, from Gaza City, blew up the tank.

Israel has been targeting Hamas since the group took responsibility for a bomb that blew up a tank in northern Gaza on Saturday, killing four soldiers.

Hamas official Abdel Aziz Rantisi warned Israel leaders that Gaza would be "the graveyard for their soldiers." He said Hamas would "continue our holy war to liberate this land," referring to Israel as well as Gaza and the West Bank.

Eight Hamas activists have been killed in the last three days, though six of them died in a mysterious explosion that may not have been tied to Israel.

Israel had closed off the West Bank and Gaza Strip on Monday at the beginning of the four-day Muslim Feast of the Sacrifice holiday.

At the time, Israel cited warnings of terror attacks in Israel. Israel had been allowing about 20,000 Palestinians to work in Israel, a fraction of the number before fighting erupted, but they, too, were idled by the closure.

In London, Palestinian officials asked for massive aid to revive their economy devastated from 29 months of Mideast violence.

Palestinian officials meeting with donor states said they need $1.5 billion through April 2004 to put their economy back on its feet, Palestinian Planning Minister Nabil Shaath told The Associated Press from London.

European donors have been reluctant to allocate more money to the Palestinian Authority, saying it has been difficult to trace where the money went amid widespread charges of corruption. Israel charges that some of the money finances terrorism. The Palestinians deny that.

Participants in the London meeting also tied their economic assistance to the Palestinians to political reforms in Yasser Arafat's Palestinian Authority and welcomed his plans to create the post of prime minister.

The United States, European Union, Russia and United Nations, known as the "Quartet," are pressing Arafat to issue a decree formally transferring specific powers to the new post of prime minister, said a Western diplomat.

Under international pressure, Arafat said Friday he would appoint a premier.

Finance Minister Salam Fayad, a former International Monetary Fund official and the U.S. and Israeli favorite for the new post, all but took himself out of the running Tuesday, saying in London he would not be a part of any plan to weaken Arafat.

In their crackdown on Hamas, Israeli soldiers shot and killed the militant when he tried to flee in the West Bank town of Yatta, south of Hebron, the army said. Palestinians identified him as Mohammed Mora, 27.

Mora "was at home when the soldiers came," said his uncle, Mahmoud Mora. "He ran away and they shot him in the leg. He carried on to another house. There, the soldiers shot him dead."

A Damascus-based Hamas leader threatened revenge for the killings and also ruled out a truce, despite Egyptian efforts to bring all the Palestinian factions together for a declaration to end attacks on Israeli civilians.

"Our retaliation will be hard and painful," Moussa Abu Marzouk told reporters in Damascus. Hamas has carried out dozens of suicide bomb attacks in Israel.