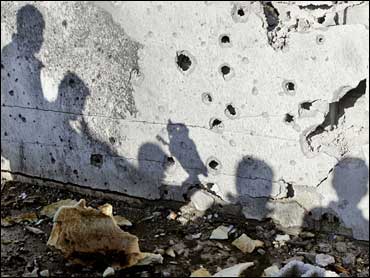 The Israeli army has been battling Hamas and other armed groups in Gaza that frequently fire rockets into southern Israel. The army appears to have made substantial gains in recent weeks, and Olmert told his Cabinet that there are no plans to slow down.

"Operations against terrorists will continue as they have been conducted for many months," Olmert said. "There is no other way to describe what is happening in the Gaza Strip except as a true war between the Israeli army and terror groups."

"This war will continue," he said, adding that Israel would continue to allow humanitarian aid into Gaza to protect the area's civilians.

Under heavy pressure from Israel's military gains and economic embargo, Gaza's Hamas rulers have signaled readiness in recent days for a cease-fire. Several Israeli Cabinet ministers have said the government should consider the offer.

Olmert said there can be no cease-fire until Hamas accepts three conditions set by the "Quartet" of international peace makers - renouncing violence, recognizing Israel's right to exist and accepting past peace agreements between Israel and the Palestinians.

The "Quartet" consists of the U.S., the European Union, the United Nations and Russia.

"Whoever accepts the Quartet principles will, in principle, be a partner for negotiations," Olmert said. "Whoever isn't willing to do so, to our regret, cannot be a partner for dialogue with us. This policy will not change."

Hamas, which is committed to Israel's destruction, rejects the international conditions.