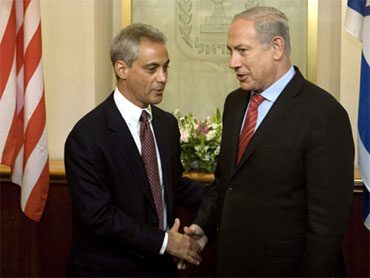 "You are an anti-Semite, a hypocrite who hates Israel!" Ben-Gvir shouted. "You want Israel to return to the 1967 borders. Shame on you!"

Many Israelis feel betrayed by Emanuel, whose father is Israeli. They blame him for what they see as President Obama's anti-Israel policy.

Ties between Israel and the U.S. have plummeted since Mr. Obama took office last year. The President demanded a freeze on Jewish construction in the West Bank and disputed East Jerusalem, charging that the settlements were an obstacle to peace with the Palestinians.

Israel initially refused, but under pressure from Washington it has since imposed a partial freeze on construction.

Two months ago, Israeli Prime Minister Benjamin Netanyahu was snubbed during a visit to the White House. The meeting was tense and there was no customary photo-op with the U.S. leader. This has created the popular perception here that Mr. Obama, and Emanuel, are selling Israel out to appease the Arab world.

Even though Emanuel is on a private visit, he took some time for official business. He met with Netanyahu (seen above) and issued a surprise invitation for a meeting at the White House next Tuesday.

Now that peace talks have resumed after a 17-month deadlock, Israeli officials say the Obama administration is apparently interested in mending fences.

Robert Berger is a CBS Radio News correspondent  in Jerusalem.