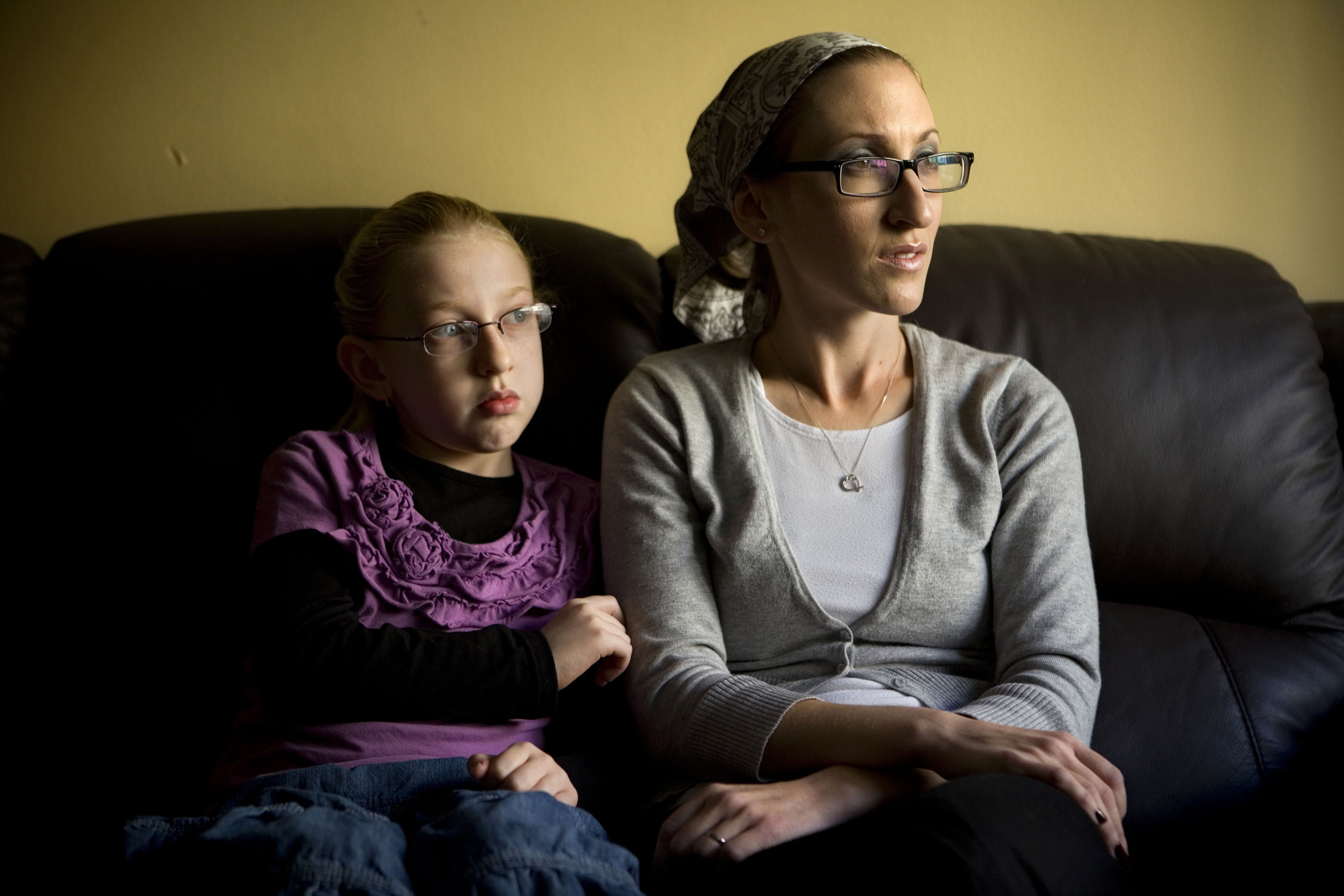 BEIT SHEMESH, Israel - A shy 8-year-old schoolgirl has unwittingly found herself on the front line of Israel's latest religious war.

Naama Margolese is a ponytailed, bespectacled second-grader who is afraid of walking to her religious Jewish girls school for fear of ultra-Orthodox extremists who have spat on her and called her a whore for dressing "immodestly."

Her plight has drawn new attention to the simmering issue of religious coercion in Israel, and the increasing brazenness of extremists in the insular ultra-Orthodox Jewish community.

"When I walk to school in the morning I used to get a tummy ache because I was so scared ... that they were going to stand and start yelling and spitting," the pale, blue-eyed girl said softly in an interview with The Associated Press Monday. "They were scary. They don't want us to go to the school."

The girls school that Naama attends in the city of Beit Shemesh, to the west of Jerusalem, is on the border between an ultra-Orthodox neighborhood and a community of modern Orthodox Jewish residents, many of them American immigrants.

The ultra-Orthodox consider the school, which moved to its present site at the beginning of the school year, an encroachment on their territory. Dozens of black-hatted men jeer and physically accost the girls almost daily, claiming their very presence is a provocation.

Beit Shemesh has long experienced friction between the ultra-Orthodox, who make up about half the city's population, and other residents. And residents say the attacks at the girls' school, attended by about 400 students, have been going on for months. Last week, after a local TV channel reported about the school and interviewed Naama's family, a national uproar ensued.

The televised images of Naama sobbing as she walked to school shocked many Israelis, elicited statements of outrage from the country's leadership, sparked a Facebook page with nearly 10,000 followers dedicated to "protecting little Naama" and a demonstration was held Tuesday evening in her honor. As the case has attracted attention, extremists have heckled and thrown eggs and rocks at journalists descending on town.

"Who's afraid of an 8-year-old student?" said Sunday's main headline in the leading Yediot Ahronot daily.

Beit Shemesh's growing ultra-Orthodox population has erected street signs calling for the separation of sexes on the sidewalks, dispatched "modesty patrols" to enforce a chaste female appearance and hurled stones at offenders and outsiders. Walls of the neighborhood are plastered with signs exhorting women to dress modestly in closed-necked, long-sleeved blouses and long skirts.

Naama's case has been especially shocking because of her young age and because she attends a religious school and dresses with long sleeves and a skirt. Extremists, however, consider even that outfit, standard in mainstream Jewish religious schools, to be immodest.

"This is a phenomenon that contradicts Jewish tradition and the spirit of the Bible," Prime Minister Benjamin Netanyahu said Tuesday evening, "with one of the most central and important among them being: Love your neighbor as yourself,"

The abuse and segregation of women in Israel in ultra-Orthodox areas is nothing new, and critics accuse the government of turning a blind eye.

The ultra-Orthodox are perennial king-makers in Israeli coalition politics — two such parties serve as key members of the ruling coalition. They receive generous government subsidies, and police have traditionally been reluctant to enter their communities.

The ultra-Orthodox Jews make up 10 percent of Israel's population. In the past, they have generally confined their strict lifestyle to their own neighborhoods. But they have become increasingly aggressive in trying to impose their ways on others, as their population has grown and spread to new areas.

"It is clear that Israeli society is faced with a challenge that I am not sure it can handle," said Menachem Friedman, a professor emeritus of Bar Ilan University and expert on the ultra-Orthodox, "a challenge that is no less and no more than an existential challenge."

Most of Israel's secular majority, in cities like Tel Aviv and Haifa, is not directly affected, but in a few places like Beit Shemesh — a city of 100,000 people that include ultra-Orthodox, modern Orthodox and secular Jews — tensions have erupted into the open.

At the protest, Israeli opposition leader Tzipi Livni said, "It's not just Beit Shemesh and not just gender segregation, it's all the extremist elements that are rearing their heads and are trying to impose their world view on us."

Last week, a young Israeli woman caused a nationwide uproar when she refused a religious man's order to move to the back of a bus.

In Beit Shemesh, parents in Naama's school take turns escorting their daughters into school property to protect them. The parents, too, have been cursed and spat upon.

Hadassa Margolese, Naama's 30-year-old Chicago-born mother, an Orthodox Jew who covers her hair and wears long sleeves and a long skirt, says, "It shouldn't matter what I look like. Someone should be allowed to walk around in sleeveless shirts and pants and not be harassed."

City spokesman Matityahu Rosenzweig condemned the violence but said it is the work of a small minority and has been taken out of proportion. "Every society has its fringes, and the police should take action on this," he said.

For Margolese, the recent clashes — and the price of exposing her young daughter — boil down to a fight over her very home.

"They want to push us out of Beit Shemesh. They want to take over the city," said Margolese.

"Many people have asked me if I intend to leave," Margolese said at the rally Tuesday evening, "and my answer is absolutely not."