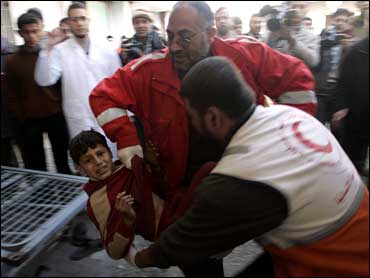 Israel says it has agreed to set up a "humanitarian corridor" to ship vital supplies to the people of the Gaza Strip.

The office of Prime Minister Ehud Olmert says in a statement that the humanitarian corridor idea came from the U.N. Security Council, and he accepted it.

Under the plan, Israel would suspend attacks in specified areas of Gaza to allow the people to get supplies. The statement early Wednesday said the goal was to "prevent a humanitarian crisis in the Gaza Strip."

Israel insists it has allowed enough supplies into the territory during 11 days of conflict, but the U.N. says there is already a humanitarian crisis there because of shortages of food, fuel and medicine.

Israel's military said its shelling was a response to mortar fire from within the school, pressing its assertion that Hamas militants are using civilians as cover. Two residents of the area who spoke by telephone said they saw a handful of militants firing mortar shells from a street near the school.

The carnage added to a surging civilian toll that has drawn increasingly urgent calls for a halt to Israel's offensive against Hamas. Diplomatic efforts, however, have failed to end the bloodshed.

The violence that engulfed the U.N. girls school in the crowded Jebaliya refugee camp in northern Gaza was the deadliest single episode since Israel sent ground forces into Gaza on Saturday.

Israel's troops and tanks pushed into Gaza after a week of intensive bombardment from warplanes in an offensive that has killed nearly 600 Palestinians, around half of them civilians, according to U.N. and Palestinian officials. The offensive was triggered by militant rocket fire on southern Israel. Four Israelis have been killed in continued rocket strikes since the offensive began Dec. 27.

The three mortar shells that crashed down on the perimeter of the U.N. school struck at mid-afternoon, when many people in the densely populated camp were out and about. Many of those who took shelter in the school apparently had stepped outside to get some air, thinking an area around a school was safe.

Images recorded by a cameraman from AP Television News showed crowds fleeing the scene, pavements smeared with blood and battered bodies of the dead being carried off by medics and horrified bystanders. A youth who limped away from the scene was helped along by several others.

Israel entered this conflict saying it wanted to change the situation in Gaza, not necessarily change the regime, reports CBS News correspondent Mark Phillips. But Hamas' resistance may be forcing Israel's hand.

The Israelis say only they can know when they have done enough damage to Hamas to stop. But Phillips reports they are fighting another enemy now as well - growing international outrage at the terrible toll this operation is taking in innocent lives.

World powers that tried but failed to get a truce in place before Israel sent in its ground forces warned of the potential for higher civilian casualties if the fighting moved onto Gaza's streets, and Gaza's main hospital has been overwhelmed with wounded innocents. Mortar fire, in particular, is far less accurate than the laser-guided bombs Israel has used throughout the campaign.

The U.N. agency that runs the school said two other U.N. schools in Gaza were struck by Israeli fire since Monday night and demanded an investigation. In the first incident, an airstrike on the Asma Elementary School in Gaza City killed three men who were among more than 400 people taking refuge in the building. In the other, an artillery shell landed inside an empty boys school in Jebaliya.

"There's nowhere safe in Gaza. Everyone here is terrorized and traumatized," said John Ging, head of Gaza operations for the United Nations Relief and Works Agency.

The episode is certain to add to the urgency of truce efforts by leaders from Europe and the Middle East.

"I sincerely hope that for the sake of those who have died that it will not have been in vain, that it will spur everybody into more immediate action to get this cease-fire agreed and just stop horrific violence," Ging said.

An Israeli military statement said it received intelligence that the dead near the school included Hamas operatives, including members of a rocket launching cell. It identified two of them as Imad Abu Askar and Hassan Abu Askar.

Two residents who spoke to an AP reporter by phone said the two brothers were known to be low-level Hamas militants. They said a group of militants - one of them said four - were firing mortar shells from near the school.

An Israeli shell targeted the men, but missed and they fled, the witnesses said, refusing to allow their names to be published because they feared for their safety. Then another three shells landed nearby, exploding among civilians, they said.

CBS News correspondent Richard Roth reports the emergency is overwhelming al-Shifa Hospital, the largest medical facility in Gaza, where there aren't enough ambulances to carry the casualties, who arrive in cars and taxis. The morgue is full.

The hospital's general manager, Hassan Khalaf, insists the vast majority of patients are civilians. He told CBS News about 30 percent of the dead and 42 percent of the injured are woman and children.

Palestinian militants have frequently fired from residential areas in the past.

Ging said the U.N. agency's staff work to prevent militants from entering the 23 schools it is using to shelter 15,000 people.

Majed Hamdan, an AP photographer, rushed to the scene shortly after the attacks. At the hospital, he said, many children were among the dead.

"I saw women and men - parents - slapping their faces in grief, screaming, some of them collapsed to the floor. They knew their children were dead," he said. "In the morgue, most of the killed appeared to be children. In the hospital, there wasn't enough space for the wounded."

U.N. officials say they provided their location coordinates to Israel's army to ensure that their buildings in Gaza are not targeted.

Military spokesman Brig. Gen. Avi Benayahu, responding to questions about the incident, said the conflict would have many difficult moments.

Israeli TV news broadcasts gave most of their attention to continued rocket fire on southern Israel. One of the two dozen rockets fired from Gaza on Tuesday wounded an Israeli infant.

There seemed to be little preoccupation in Israel with the deadly scene at the school.

In the past, however, Israeli ground offensives have been cut short when an errant shell or missile hit a civilian center, killing and wounding women and children, leading to an international outcry that forced Israel to stand down.

In 1996, an invasion of southern Lebanon to quell militant rocket fire at northern Israel was aborted after an artillery shell hit a camp of villagers next to a U.N. post, killing about 100 people.

In November 2006, Israeli forces withdrew from northern Gaza after a shell hit a house, killing 18 members of a family, including eight children, setting off a world outcry. Rocket fire at Israel resumed immediately.

Seven Israeli soldiers have been killed since the ground operation began, including four killed Monday in a two separate friendly fire incidents. Higher tolls among soldiers could also sap support for the offensive.

A total of 71 Palestinians were killed Tuesday - with just two confirmed as militants, health officials in Gaza said.

Despite international criticism over civilian deaths and calls for a cease-fire, Israeli tanks rumbled closer to the towns of Khan Younis and Dir el Balah in south and central Gaza but were still several miles outside, witnesses said. Israel already has encircled Gaza City, the area's biggest city.

Israel says it won't stop the assault until its southern towns are freed of the threat of Palestinian rocket fire and it receives international guarantees that Hamas, a militant group backed by Iran and Syria, will not restock its weapons stockpile.