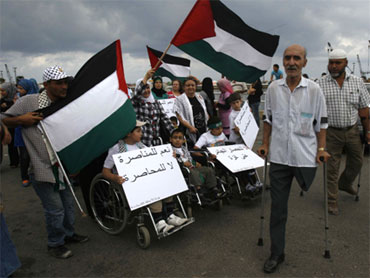 Israel eased a three-year blockade of Gaza Wednesday to allow in some previously banned food items in an effort to defuse the worldwide furor over its deadly raid on a Gaza-bound international flotilla. But critics said the step falls far short of what is needed in the impoverished Palestinian territory.

In the first tangible step to temper the uproar caused by last week's raid, Israel only narrowly expanded the list of items that can enter by adding little more than snack foods and spices. It did not permit the most sought after items, such as cement, steel and other materials needed to rebuild the war-devastated territory and it was unlikely to ease international pressure.

"The international community is united in seeking an urgent and fundamental change in Israel's policy of blockading Gaza," said Maxwel Gaylard, the U.N.'s most senior humanitarian official in the Palestinian territories. "A modest expansion of the restrictive list of goods allowed into Gaza falls well short of what is needed. We need a fundamental change and an opening of crossings for commercial goods."

Israeli officials said the move was meant to defuse pressure for an international investigation of the May 31 raid. The clashes broke out after Israeli naval commandos boarded one of six ships on the flotilla and some of the hundreds of pro-Palestinian activists on board attacked them with pipes and other makeshift weapons. The Israelis killed nine.

The clash drew attention to the blockade, imposed by Israel and Egypt to punish and isolate Hamas militants who seized power of Gaza in 2007. Hamas does not recognize Israel, and refuses to renounce violence. Israel also wants to put pressure on Hamas to release a captured Israeli soldier it has held for four years.

The blockade prevents all but basic humanitarian items and consumer goods from getting in, bars exports and prevents the import of goods such as metal cans and tubs of margarine needed for industrial production.

Israel says the restrictions are needed to prevent Hamas, a group that has fired thousands of rockets into Israel, from rearming. It claims construction materials such as cement or metal could be used for military purposes.

Gaza has been mired in poverty for decades but the closure deepened the misery, erasing tens of thousands of jobs and preventing the area from repairing damage from a fierce Israeli military offensive last year launched in response to years of Hamas rocket attacks from the territory.

"I think Israel wants to diffuse international pressure," said Fattouh. "They want to show people that they are allowing things into Gaza. But it's not important for Gaza. The important thing for us is construction materials, electrical goods, notebooks, many things."

A Hamas spokesman, Sami Abu Zuhri, said the gesture was not worth commenting on.

An Israeli government official said authorities would continue to ease the blockade but could not lift the embargo altogether as long as Hamas remains in control.

The Israeli officials all spoke on condition of anonymity pending a formal government announcement.

Some of the items banned from Gaza seem arbitrary. Basic foodstuffs such as instant coffee and coriander were barred as luxury items, while more expensive foods such as herbal tea, salmon steaks and low-fat yogurt were permitted.

"We are pleased that juice and sesame paste are no longer considered threats to Israeli security, but Israel needs to let in raw materials necessary to allow Gaza residents to engage in dignified, productive work," she said.

Israel has rejected calls for an international investigation into the raid, fearing it would be biased against the Jewish state. Instead, officials are working on a formula for an investigation to be run by Israelis while including some international observers. Israel has been seeking U.S. support for this approach, but so far has not been able to reach a formula.

"We are conferring with various factors in the international community regarding the appropriate process of investigation that will expose the facts on the Gaza flotilla. We know the truth," Prime Minister Benjamin Netanyahu told an investors' conference.

Netanyahu said he, along with top government and military officials, would be willing to appear before the probe, but said it must look at key questions about the activists that clashed with the soldiers. Israel alleges they were hired mercenaries.