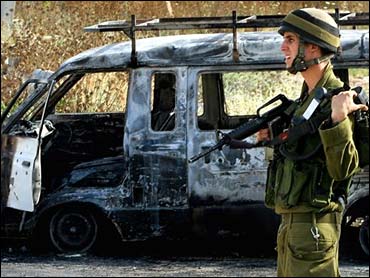 The Mideast cease-fire could be unraveling as diplomacy gets into high gear.

Abbas has promised to prevent Palestinian militants from firing on Israeli soldiers and settlers as they withdraw, but Sharon doubts that Abbas can deliver.

Khadr Adnan, an Islamic Jihad spokesman in the West Bank, said if the Palestinian Authority and Egypt, which brokered the cease-fire declaration, don't take action to ensure Israeli commitment to the truce, "then we will consider ourselves to be outside (it), and will call upon all Palestinian factions to do the same."

Islamic Jihad is the smaller of the two main militant groups in the Gaza Strip and West Bank. In addition to this week's violence, the group carried out the deadliest single attack since the truce declaration, a Feb. 25 bombing of a Tel Aviv nightclub that killed five Israelis.

The larger militant group, Hamas, has been relatively quiet as it tries to cement a political following ahead of Palestinian legislative elections later this year.

Palestinian official Saeb Erekat said the Palestinian attacks and Israeli arrests endangered the cease-fire, and "have really cast a dark cloud over the summit."

"I want to condemn the cycle of violence that preceded the anticipated summit today," Erekat said. "The Israeli arrests this morning will not add anything to sustaining the quiet."

The Abbas-Sharon meeting followed a visit to the region just a few days ago by Secretary of State Condoleezza Rice, who tried to bolster prospects for a successful Sharon-Abbas meeting and a peaceful pullout.

In Washington, U.S. officials called on Abbas to take action against militants.

"We strongly condemn the terror actions of the last several days, directed at taking the lives of Israelis and sabotaging efforts for peace," State Department spokesman Sean McCormack said Monday. "Now is the time for the Palestinian Authority to act against terrorists."