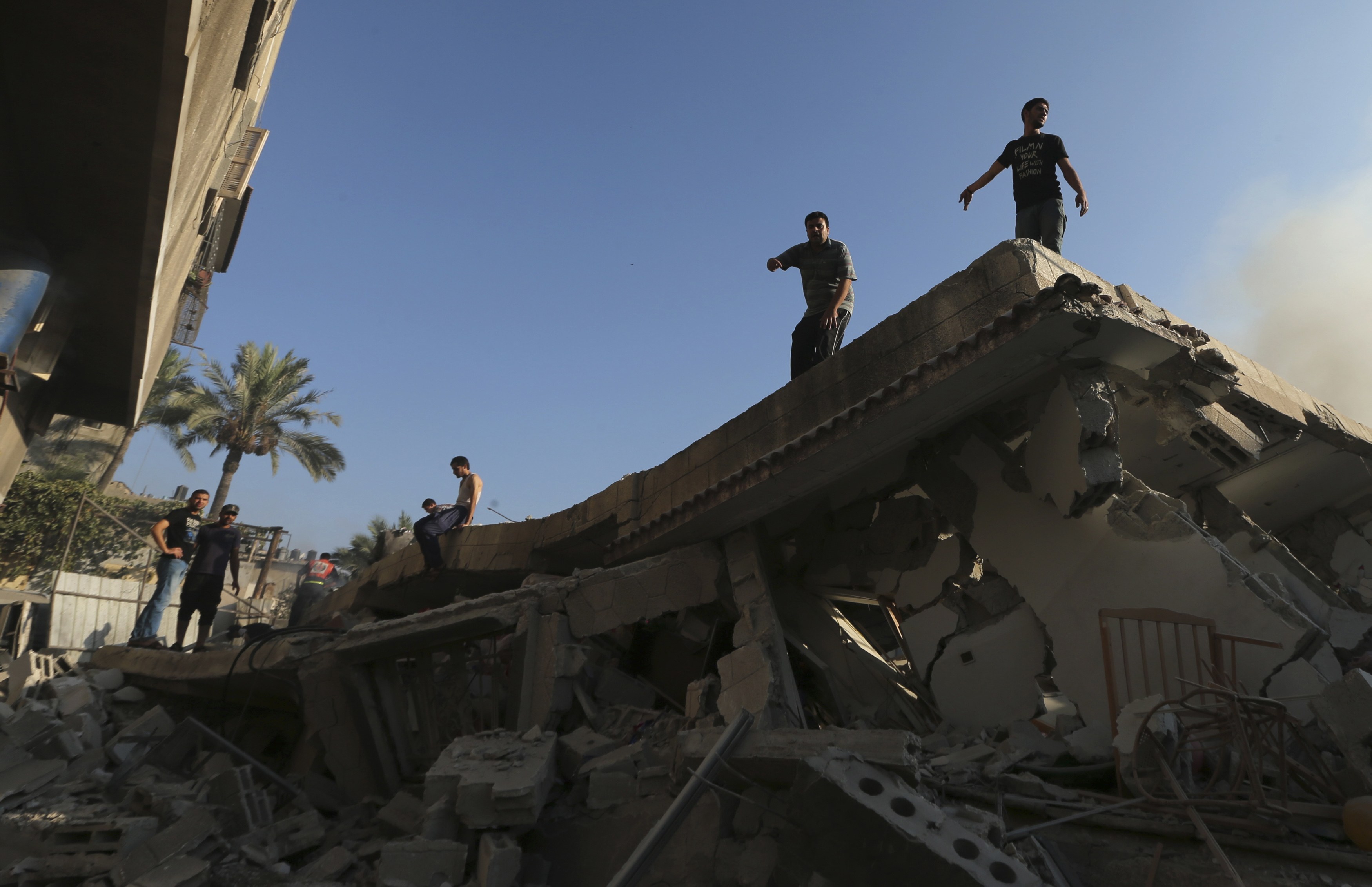 JERUSALEM -- Israeli Prime Minister Benjamin Netanyahu says the military will dismantle the Hamas tunnel network in the Gaza Strip "with or without a cease-fire."

Netanyahu said Thursday he will not accept any truce that won't allow Israel to complete its mission of destroying the sophisticated tunnel network, which has been used to carry out deadly attacks inside Israel.

"We are determined to complete this mission with or without a ceasefire," Netanyahu said before a cabinet meeting in Tel Aviv. "I won't agree to any proposal that will not enable the Israeli military to complete this important task for the sake of Israel's security."

Israel says most of the 32 tunnels it has uncovered have now been demolished and that getting rid of the remainder will take no more than a few days.

The remarks came after Israel's military said it was calling up another 16,000 reserves, a move that could enable it to substantially widen its 23-day campaign against Islamic militants in the strip.

Speaking on condition of anonymity because he was not permitted to discuss the matter with the press, an Israeli defense official said the purpose of the latest call-up was to provide relief for troops currently on the Gaza firing line.

However, Israeli officials have also said they do not rule out broadening operations in the coming days.

The new call-up orders follow another day of intensive fighting, in which 116 Palestinians and three Israeli soldiers were killed.

It also coincides with stalled diplomatic efforts to end the war, which has already claimed more than 1,422 Palestinian lives -- most of them civilians -- and reduced entire Gaza neighborhoods to rubble.

Fifty-six Israeli soldiers and three civilians on the Israeli side have died in the campaign, as Palestinians have fired hundreds of rockets at Israel -- some reaching major cities -- and carried out attacks inside Israel through tunnels beneath the heavily guarded frontier.

Israel has now called up a total of 86,000 reserves during the Gaza conflict, which it launched on July 8 to try to end rocket fire from Hamas and other militant groups in Gaza.

An initial aerial campaign was widened into a ground offensive on July 17. Since then, the campaign has concentrated on destroying more than 30 cross-border tunnels that militants have constructed to carry out attacks on Israeli territory.

Wednesday marked a second day of particularly heavy Israeli air and artillery attacks, at a time when Egyptian cease-fire efforts appeared to have stalled. Israeli media said late Wednesday that Israel's Security Cabinet decided to press forward with the operation.

Egyptian officials, meanwhile, met with an Israeli envoy about Israel's conditions for a cease-fire, including disarming Hamas, according to a high-ranking Egyptian security official, who spoke on condition of anonymity because he was not allowed to discuss the delicate diplomatic efforts.

Hamas has said it will only halt fire once it receives guarantees that a seven-year-old Gaza border blockade by Israel and Egypt will be lifted.

The attack on the U.N. school in the Jebaliya refugee camp was the second deadly strike on a U.N. compound in a week. Tank shells slammed into the compound before dawn, said Adnan Abu Hasna, a spokesman for the U.N. Relief and Works Agency, UNRWA, which is sheltering more than 200,000 people displaced by the fighting at dozens of U.N. schools across Gaza.

Gaza health ministry official Ashraf al-Kidra said at least 17 people were killed and about 90 wounded in the school strike.

The Israeli military said it fired back after its soldiers were targeted by mortar rounds launched from the vicinity of the school.

The U.N. said it was the sixth school to be hit since the conflict began, and the second to cause deaths. At least 15 civilians also were killed last Thursday when the courtyard of a U.N. school in Gaza City was hit. Israel has acknowledged that troops fired a mortar shell that hit the courtyard but said aerial footage shows the yard was empty at the time and that the shell could not have killed anyone.

Secretary-General Ban Ki-moon called Wednesday's trike "outrageous" and "unjustifiable," and demanded an immediate humanitarian cease-fire in the war between Israel and Hamas.

"Nothing is more shameful than attacking sleeping children," Ban said on his arrival in San Jose, Costa Rica. He added that "all available evidence points to Israeli artillery as the cause" and noted that Israeli military authorities had received the coordinates of the school from the United Nations 17 times, including on Tuesday night.

The White House also condemned the deadly shelling. Spokeswoman Bernadette Meehan also said the U.S. is "extremely concerned" that thousands of Palestinians aren't safe in U.N.-designated shelters, despite being told by Israel's military to leave their homes. Israel has been warning civilians by phone and leaflet to leave dangerous areas ahead of strikes on militant targets.