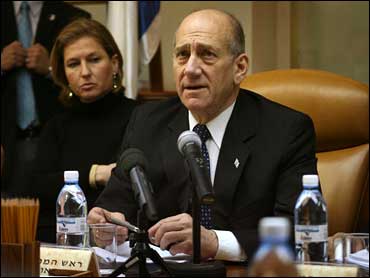 A new snag to President Bush's peacemaking efforts has appeared after the killing of two Israeli hikers in the West Bank by Palestinian gunmen: Israel's premier says no peace moves will be carried out until the Palestinians crack down on militants.

Sunday's setback came after the two sides decided to paper over another spat - Israel's plan to build 307 new apartments in a Jewish neighborhood in east Jerusalem, the section claimed by the Palestinians as their future capital - clearing the way at that point for Bush to push for progress.

Israeli Prime Minister Ehud Olmert and Palestinian President Mahmoud Abbas pledged to restart serious peace talks at the Mideast conference convened by Bush last month in Annapolis, Maryland, aiming for a peace agreement by the end of 2008. But periodic crises are already hampering the efforts.

The latest was the Friday killing of the two hikers, off-duty Israeli soldiers, shot dead by Palestinian attackers in a valley near the West Bank city of Hebron. There were two claims of responsibility - a joint statement from Hamas and Islamic Jihad and another from the Al Aqsa Martyrs' Brigades, which has ties to Abbas' Fatah movement.

Speaking before the weekly meeting of Israel's Cabinet, Olmert denounced the killings.

"As long as the Palestinian Authority doesn't take the necessary steps and act with the necessary vigor against terror organizations, Israel won't be able to carry out any change that would expose it to any jeopardy or endanger Israel's security," he said.

In contrast, Palestinian negotiator Saeb Erekat saw the talks as an answer to violence. "To address this issue between Palestinians and Israelis, we need the resumption of a meaningful peace process," Erekat said.

The internationally backed "road map" peace plan, the agreed basis for the talks, requires the dismantling of militant Palestinian groups. Israel has long demanded that such a crackdown precede implementation of any peace accords.

There have been two meetings of negotiating teams and one Olmert-Abbas summit since the Annapolis conference. After debating Israeli settlement policy and Jerusalem construction, the two sides have agreed to start tackling the main issues - the status of Jerusalem, fate of Palestinian refugees and final borders, disputes that have stymied years of peace efforts.

Abbas aide Yasser Abed Rabbo said Sunday that the Palestinians decided to gloss over the dispute over Jerusalem construction in order to keep the Israelis from blaming them for a stalemate. "We will not give the Israelis a pretext to claim that the peace process has failed due to the Palestinian boycott, not due to their settlement activities," he told a meeting of West Bank intellectuals in Ramallah.

The Palestinians demand a complete halt to construction in Israel's West Bank settlements, in keeping with the terms of the "road map." Israel claims the right to build inside the settlements without expanding them and does not accept a building ban in east Jerusalem, which it has annexed.

Abed Rabbo said a Palestinian delegation would head to Washington this week for talks to prepare for Mr. Bush's visit, set to begin Jan. 8. President Bush is hoping for significant progress toward peace between Israel and the Palestinians as a mark of success for his foreign policy.