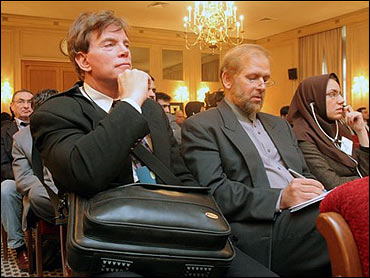 Iran's hard-line president said Tuesday that Israel will be one day be "wiped out" just like the Soviet Union was, drawing applause from participants in a world conference casting doubt on the Nazi Holocaust during World War II.

President Mahmoud Ahmadinejad's comments were likely to further fuel the outcry sparked by his hosting of the two-day gathering, which has gathered some of Europe and the United States' most well-known Holocaust deniers.

Anger over the conference could have political fallout, further isolating Iran and prompting a harder line from the West, which is considering sanctions against Tehran in the standoff of its nuclear program.

But Ahmadinejad appeared to revel in his meeting Tuesday with the conference delegates, shaking hands with American delegates and sitting near six anti-Israeli Jewish participants, dressed in black ultra-Orthodox coats and hats.

Ahmadinejad repeated predictions that Israel will be "wiped out," a phrase he first used in a speech in October, raising a firestorm of international criticism.

"The Zionist regime will be wiped out soon the same way the Soviet Union was, and humanity will achieve freedom," Ahmadinejad told the participants during Tuesday's meeting in his offices, according to the official IRNA news agency.

"By the grace of God, the arc of the Zionist regime's life has reversed and is heading downward. This is a divine promise and the public demand of all nations of the world," he said, bringing applause from the delegates.

The Tehran conference was touted by participants and organizers as an exercise in academic free expression, a chance to openly consider whether 6 million Jews really died in the Holocaust far from laws in several European countries that ban questioning some details of the Nazi genocide during World War II.

It gathered 67 writers and researchers from 30 countries, most of whom argue that either the Holocaust did not happen or was vastly exaggerated. Many had been jailed or fined in France, Germany or Austria, which have criminalized Holocast denial.

Participants milled around a model of the Auschwitz concentration camp brought by one speaker, Australian Frederick Toben, who uses the mock-up in lectures contending that the camp was too small to kill mass numbers of Jews. More than 1 million people are estimated to have been killed there.

"This conference has an incredible impact on Holocaust studies all over the world," said American David Duke, a former Ku Klux Klan leader and former state representative in Louisiana.

"The Holocaust is the device used as the pillar of Zionist imperialism, Zionist aggression, Zionist terror and Zionist murder," Duke told the Associated Press.

Ahmadinejad has used anti-Israeli rhetoric and comments casting doubt on the Holocaust to rally anti-Western supporters at home and abroad, particularly in Asia and the Middle East. Several times he has referred to the Holocaust as a "myth" used to impose the state of Israel on the Arab world.

The conference has produced worldwide condemnation.

British Prime Minister Tony Blair said Tuesday that the conference was "shocking beyond belief" and called the conference "a symbol of sectarianism and hatred."

He said he saw little hope of engaging Iran in constructive action in the Middle East, saying, "I look around the region at the moment, and everything Iran is doing is negative."

In Washington, the White House condemned Iran for convening a conference it called "an affront to the entire civilized world."

"This has nothing to do with research or any exploration of the historical issues but is merely an attempt to bring together anti-Semites to try and disseminate anti-Semitic propaganda and delegitimize the state of Israel," said Ephraim Zuroff, who heads the Israeli branch of the Simon Wiesenthal Center.