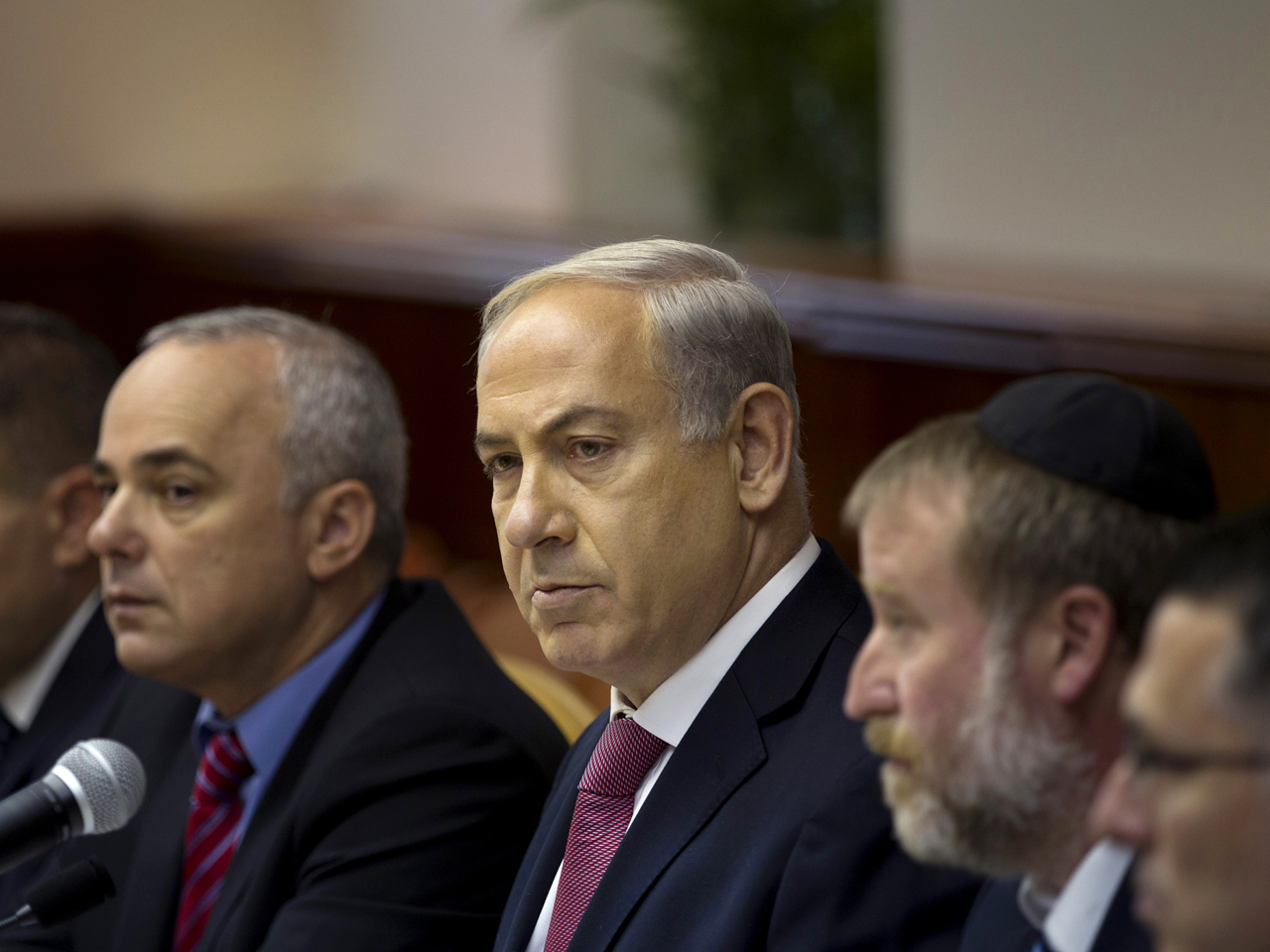 The U.S. said preliminary talks would begin Monday. Release of the prisoners is linked to progress in the talks, meaning many could well remain behind bars.

Neither side appeared upbeat, despite the possibility of renewed talks. Each has blamed the other for the lack of success in 20 years of negotiations, and Kerry's success so far has been only to get the parties back to the table.

The prisoner release, approved 13-7 with two abstentions, is a key part of the Kerry-brokered deal.

Next, Israeli and Palestinian teams meet in Washington on Monday, the State Department spokeswoman said, to prepare for six to nine months of negotiations on setting up a Palestinian state alongside Israel.

State Department spokeswoman Jan Psaki said in a statement that talks would begin Monday evening and continue Tuesday. It said the talks would "serve as an opportunity to develop a procedural work plan for how the parties can proceed with the negotiations in the coming months."

Netanyahu, seeking to overcome stiff opposition from ultra-nationalists, told his Cabinet that "resuming the political process at this time is important for Israel," noting that any deal would be submitted to a national referendum.

The chief Palestinian negotiator, Saeb Erekat, welcomed the vote on the prisoners as a "step toward peace," one he said is long overdue.

Negotiators made progress in previous rounds, and the outlines of a deal have emerged — a Palestinian state in most of the West Bank, Gaza and east Jerusalem, lands captured by Israel in 1967, with border adjustments to enable Israel to annex land with a majority of nearly 600,000 settlers.

Those negotiations broke down before the sides could tackle the most explosive issues, a partition of Jerusalem and the fate of Palestinian refugees and their descendants, now several million people.

Abbas remains leery of negotiating with Netanyahu, fearing any offer made by the hard-liner would fall far short of Palestinian demands, so he has insisted on a clear framework for negotiations.

Abbas said over the weekend that Kerry assured him the invitation to the negotiators will say border talks are based on the 1967 line — though Netanyahu has not said whether he has dropped his long-standing opposition to that demand.

In Washington, the Israeli and Palestinian teams are supposed to close the remaining gaps on the framework for talks, and they could well falter at that early point.

Israel's release of veteran prisoners could help Abbas persuade a skeptical Palestinian public that it's worthwhile returning to negotiations.

Netanyahu has repeatedly called for a resumption of negotiations that broke down in 2008, but he has not sketched the outlines of a deal he would be willing to strike, except to say he opposes a partition of Jerusalem.

In Sunday's Cabinet meeting, he pushed through the prisoner release despite opposition by two ministers in his Likud Party and by those from a main coalition partner, the pro-settler Jewish Home Party.

Outside the government complex, hundreds protested against a release. Among them were families of Israelis killed in attacks by Palestinian militants. Some held up pictures of their loved ones.

Naftali Bennett, the head of Jewish Home, briefly joined the protesters before attending the Cabinet meeting. "It's a hard day, the decision was made and I hope we won't pay a horrible price for this in the future," he said after the vote.

In the West Bank and Gaza, some relatives of prisoners anxiously awaited word. "Now there is a big relief," said Walid Abu Muhsen, 45, whose brother Jamal has been in prison for the past 22 years for killing an Israeli farmer.

The first disagreements emerged just hours after the Cabinet vote, reflecting the hostility and deep mistrust between the two sides.

Under the deal brokered by Kerry, Israel is supposed to free 104 prisoners who carried out attacks before the first interim peace agreements of the early 1990s.

Palestinian negotiators handed Kerry a list of 104 prisoners, arrested between 1983 and 1994. They said Kerry assured them Israel would release the prisoners in four stages over several months, with each release linked to progress in negotiations.

Among the 104 prisoners on the Palestinian list are two dozen who either have Israeli citizenship or come from Israeli-annexed east Jerusalem. In the past, Israeli media have said Israel would not free them.

On Sunday evening, an official in Netanyahu's office said that no Israeli Arabs are among the 104 whose release was authorized by the Cabinet. Asked to explain the discrepancy, he said Israel holds more than 104 "pre-Oslo" prisoners, suggesting the two sides apply different definitions.

"The agreement with Kerry was that all the pre-Oslo prisoners, including Israeli Arabs and east Jerusalem residents, will be released," he said. "If they (Israelis) exclude any of them, there will be a problem that might hinder the talks."

"Netanyahu has given himself a carrot that he can hold out to the Palestinians," he said. "Netanyahu can refuse to release the later batches if there's no progress."