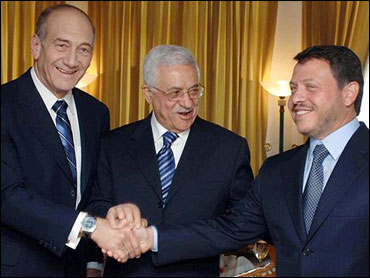 Some 13 Palestinian civilians have been killed in Israeli air strikes in the past week, including two people in a Gaza house on Wednesday and three children in Gaza on Tuesday.

Olmert said he felt "deep regret for the death of innocent Palestinians."

"It is against our policy and I am very, very sorry," he added.

Later, speaking at an economic conference in Jerusalem, Olmert apologized "from the depths of my being" for civilian deaths in recent airstrikes in Gaza, but he added, "Israel will continue to carry out targeted attacks against terrorists and those who try to harm Israeli citizens."

Olmert said the Palestinian government was "controlled by a terrorist group" and "boycotted by the entire world."

"We discussed one point — how to prepare for a forthcoming meeting," Abbas said after returning to Ramallah. "Preparations for the meeting will begin next week," he said.

An Abbas aide, Nabil Abu Rdeneh, said the meeting would happen "in the coming two weeks," and that Abbas was awaiting word from Israel about when and where to schedule it.

"From Olmert's first day in office, we informed them that we are ready for negotiations and to set at the table, and we are waiting for the Israelis," he said.

"We will have to find a way to separate between the civilians and the terrorists," said government spokesman Raanan Gissin.

On June 9, a beach explosion killed another eight Palestinian civilians. Palestinians blame Israel for that incident, but Israel has denied responsibility, saying the blast came from a mine Palestinian militants had planted on the beach.

"We have to fight terrorism and we are doing it," Maj. Gen. Eliezer Shakedi, the Israeli air force commander, said, adding that the air strikes were "the most accurate and the best possible option without launching a broad and very significant (ground) operation."

After their breakfast, Olmert and Abbas both said they had been in regular contact by telephone.

They shook hands, embraced and kissed each other on the cheek. Asked about his handshake with Olmert, Abbas said, "It was very warm, very warm."

Leaving the meeting, Olmert nodded to reporters when asked if he would meet Abbas again.

The breakfast took place in Petra, a 2,000-year-old city carved into Jordan's rose-red mountains, on the sidelines of a two-day gathering of Nobel prize winners. Olmert, Abbas and Abdullah sat at a round breakfast table with the Dalai Lama, a deputy Thai prime minister and Elie Weisel, a Holocaust survivor and the 1986 Nobel Peace Prize winner.

Israeli Vice Premier Shimon Peres, also a Nobel laureate, said Thursday that Israel was not ready for "serious" talks until an internal dialogue among Palestinian factions was resolved.

Asked whether he considered the dialogue positive, Peres said: "Not if Hamas wins."

Abbas has been seeking to persuade Hamas to accept a document implicitly recognizing Israel as way out of a crippling world aid boycott. If Hamas continues to reject the document, prepared by a group of prominent Palestinian prisoners jailed in Israel, Abbas plans to bring the idea to the voters in a July 26 referendum.

Abbas said Thursday that he hoped his dialogue with Hamas would "reach a positive outcome ... so the world can interact with us and end its siege."

Meanwhile, a Hamas lawmaker and spokesman, Mushir Al Masri, said his group was not optimistic about future negotiations between Olmert and Abbas.

"Experience has proven that such meetings can't bring anything to our people," he said. "Our people don't trust these meetings," he added.

"Every meeting has its importance, but these aren't negotiations," he said, adding that "mountains don't meet, but people do."

Abu Rdeneh said that "talking with Mr. Olmert is a good thing to do, but we are looking forward to the formal meeting that will take place in a couple of weeks."