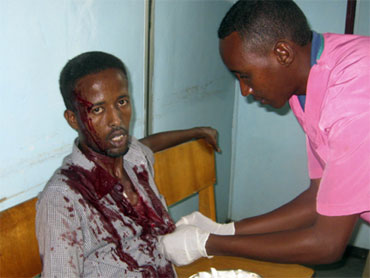 A suicide bomber and one of the gunmen were also killed in the brazen attack just a half-mile from the presidential palace. The attack showed the insurgent group al-Shabab, which controls wide areas of Somalia, can penetrate even the few blocks of the capital under the control of the government and African Union troops.

Survivors of the hour-long slaughter described seeing bodies strewn throughout the hotel and people scrambling to safety through windows. An 11-year-old shoeshine boy and a woman selling tea were among the dead.

In an interview with The Associated Press, one parliamentarian said she was jolted awake by the popping sound of gunfire. Saynab Qayad said three fellow lawmakers staying on the top floor of the three-story hotel drew their guns while other guests fled out windows.

"Smoke filled my room after bullets smashed my window. I hid myself in a corner of the room. Then a guest next door came to my door, screaming 'Come out! Come out!' And when I came out bullets continued to fly around.

"I went back to my room and locked my door. Shortly afterward, the hotel staff asked me to come down and put me in a room at the second floor with four other survivors," she said. "The body of a member of parliament was lying at that small room's door."

After it was over, Somali government forces tied the body of one of the dead assailants to the back of a pickup truck and dragged it through the dusty streets of the capital, a scene eerily reminiscent of how bodies of dead American soldiers were treated following the disastrous Black Hawk Down battle of 1993 in Mogadishu.

Tuesday's attack only extended the stream of warfare that rattled Mogadishu on Monday, when 40 civilians died in fighting between al-Shabab and Somali and African Union troops.

Al-Shabab, which has links to al Qaeda and boasts veterans of the Iraq and Afghanistan wars among its ranks, has grown deadlier in recent months. Last month it claimed twin bombings in Uganda during the World Cup final that killed 76 people.

"The only intention of this group is to destroy the nation, massacre people and then finally hand the country to ruthless foreigners," Somali President Sheik Sharif Sheik Ahmed said. "So I call upon all Somali people to unite fighting against these enemies and help government forces."

The militant group is fighting to oust the 6,000 African Union troops from Uganda and Burundi that prop up the U.N.-backed Somali government — forces whom al-Shabab calls crusaders and invaders.

"We will eliminate them from our country in a battle we call 'the end of the aggressors,"' Rage said. "They wanted to enjoy themselves in hotels while women and children are sent to makeshift homes."

Al-Shabab calls itself a defender of the nation, but its interpretation of Islam is harsh. Al-Shabab forbids music, TV or letting women walk alone. Men must grow beards. Punishments can range from amputation to death by stoning.

In response to the World Cup attacks, the African Union pledged to increase its troop commitments to Somalia, an approach backed by the United States. The U.S. does not have any troops in Somalia but helps pay to train Somali troops and sends surveillance aircraft over Somalia. 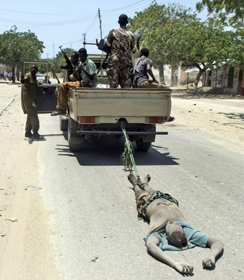 (AP Photo/Farah Abdi Warsameh)
The Somali government has struggled for years to gain relevancy, but corruption and its minuscule footprint in the country — just a few city blocks near the seaside airport — have limited its effectiveness. The deaths of six parliamentarians will have no practical effect on the government functions.

In a similar attack in December, a suicide bomber detonated himself at a university graduation ceremony about 1½ miles from Tuesday's hotel attack, killing 24 people, including three government ministers, medical students and doctors.