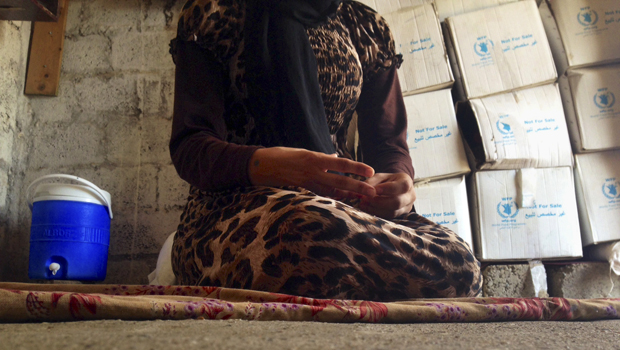 MAQLUBA, Iraq -- The young Yazidi girl rocked apprehensively as she described the ordeal that took her from her family, snatched from her home by militants in Iraq, then sold as a slave in Syria before finally escaping to Turkey.

The 15-year-old is now with what is left of her family - two of her brothers and some more distant relatives - living in a makeshift roadside shelter in this tiny village in northern Iraq, along with other families shattered by the onslaught from the militant group known as the Islamic State of Iraq and Syria, or ISIS.

Her two sisters remain in the militants' hands, and her father, other brothers and other male relatives have vanished, their fates unknown.

The girl was among hundreds of women and girls from the Yazidi religious minority captured by ISIS fighters in early August when the militants overran her hometown of Sinjar in northwestern Iraq. Hundreds were killed in the attack, and tens of thousands fled for their lives, most to the Kurdish-held parts of northern Iraq.

Iraq's Human Rights Ministry said at the time that hundreds of women were abducted by the militants, who consider the Yazidis a heretical sect.

The Associated Press spoke to the girl and several other young women who escaped captivity by ISIS, also known as the Islamic State of Iraq and the Levant, or ISIL. While specifics of their stories could not be independently confirmed, they reflected circumstances reported by the United Nations last month.

They each independently painted a similar picture of how the militants scattered them around the broad swath of territory controlled by ISIS in Syria and Iraq and sold the girls to the group's foreign fighters or other supporters for "marriage."

Their stories stand in contrast with the growing number of teenage girls making the journey to Iraq and Syria to join ISIS fighters, CBS News correspondent Charlie D'Agata reports. Up to 50 British women and girls are now with ISIS.

For weeks after being snatched from Sinjar, the 15-year-old girl and two of her sisters were shifted from one place to another, she said. The AP does not identify victims of abuse, and the girl also did not want to be named for fear of reprisals against her relatives still being held by the militants.

As she told her story, the girl rubbed her hands and avoided eye contact. But she spoke decisively and clearly, never hesitating when asked questions. She asked her relatives to leave the room, saying she was more comfortable speaking alone.

First, she said, she and other girls were taken to the nearby town of Tal Afar, where she was kept in the Badosh Prison. When U.S. airstrikes began around the town, the militants took her and many other girls with them to ISIS' biggest stronghold, Mosul, in northern Iraq.

From the city of Mosul, she and her sisters were taken to the militants' de facto capital, the Syrian city of Raqqa. There they were held in a house with other abducted girls.

"They took girls to Syria to sell them," she said, her body shyly hunched over as she spoke. "I was sold in Syria. I stayed about five days with my two sisters, then one of my sisters was sold and taken (back) to Mosul, and I remained in Syria."

In Raqqa, she said, she was first married off to a Palestinian man. She claims she shot him, saying the Palestinian's Iraqi housekeeper who was in a dispute with the man helped her by giving her a gun. She fled, but she had nowhere to run. So she went to the only place she knew, she said - the house where she was first held with the other girls in Raqqa.

There, the militants did not recognize her and sold her off again - for $1,000 to a Saudi fighter, she said. The Saudi militant took her to a house where he lived with other fighters.

"He told me, 'I'm going to change your name to Abeer, so your mother doesn't recognize you,'" she said. "'You'll become Muslim, then I will marry you.' But I refused to become a Muslim and that's why I fled."

She said she saw the fighters at time taking a powdered drug. So she poured it into tea she served to the Saudi and the other men, causing them to fall asleep. Then she fled the house.

She found a man who would drive her to Turkey to meet her brother. Her brother then borrowed $2,000 from friends to pay a smuggler to get them both back to Iraq. They ended up in Maqluba, a tiny roadside hamlet just outside the Kurdish city of Dahuk, where several other Yazidi families are staying.

The other women who spoke to The AP described difficult conditions, where the militant fighters would deprive them of enough food, water or even a place to sit. They all reported having seen dozens of other Yazidi women and children as young as 5 years old in captivity, and they all said that they have relatives who are still missing.

Amsha Ali, a 19-year-old, said she was taken from Sinjar to Mosul. Ali was around six months pregnant at the time. The last she saw of her husband and other men in her family as she was being dragged off, was the scene of the militants forcing them to lie on the ground, apparently to shoot them. Ali agreed to be identified, saying she wanted the ordeals of the women to be known.

In Mosul, she said, she and other women were taken to a house full of ISIS fighters to be married off. "Each of them took one of us for themselves," she said. She too was given to a fighter. She said she was never raped by the man - likely because of her pregnancy, she said - but she witnessed other girls being raped.

After several weeks, she was able to slip out of a bathroom window at night and escape. A Mosul resident who found her in the streets helped her get out of the city to nearby Kurdish territory on Aug. 28, she said. She said she tried to convince other women to flee with her, but they were too afraid. "Because they were so terrified, they are left there and now I know nothing about them," she said.

Now Ali is with her father and a surviving sister living in an unfinished building in the town of Sharia, where some 5,000 Yazidi refugees live, also near Dahuk.