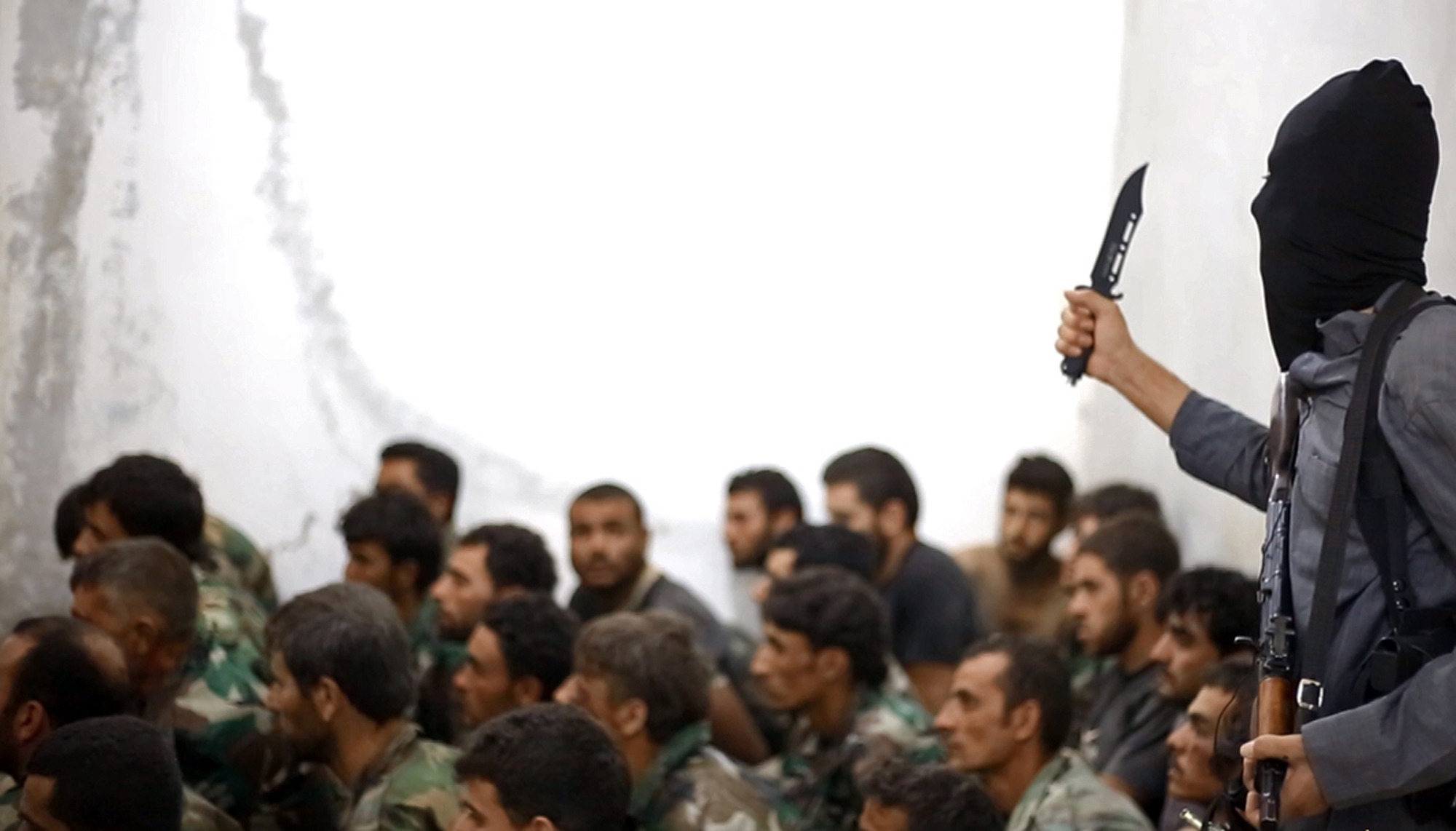 BEIRUT -- The Islamic State of Iraq and Syria (ISIS) killed more than 160 troops captured in recent fighting for a string of military bases in northeastern Syria, shooting some and slashing others with knives in the past 24 hours in the latest mass killing attributed to the extremists, activists said Thursday.

In southern Syria meanwhile, gunmen detained 43 U.N. peacekeepers during fighting on the Syrian side of the Golan Heights, the United Nations said. It added that another 81 peacekeepers were trapped in the area by the heavy clashes between rebels and Syrian troops.

The killing of government troops, combined with photos of dusty, terrified conscripts under militant guard in the desert, underscored how the extremist group uses violence - and images of violence - to instill fear in its opponents as it seeks to expand the proto-state it has carved out in Syria and neighboring Iraq.

The Britain-based Syrian Observatory for Human Rights said that many of the soldiers killed were rounded up Wednesday in the arid countryside near the Tabqa airfield, three days after ISIS fighters seized the base. The government troops were among a large group of soldiers from the base who were stuck behind the front lines after the airfield fell to the jihadi fighters.

The Observatory said around 120 captive government troops from Tabqa were killed near the base. ISIS fighters killed at least another 40 soldiers, most of whom were taken prisoner in recent fighting for other bases in the area, in the Hamrat region near Raqqa city, the group's stronghold.

A statement posted online and circulated on Twitter by supporters of ISIS claimed the extremists killed "about 200" government prisoners captured near Tabqa. It also showed photographs of what it said were the prisoners: young men stripped down to their underwear marching in the desert. The photos could not immediately be verified, but correspond to other AP reporting.

A video that emerged online purportedly showed ISIS fighters escorting nearly 200 men, stripped down to their underwear and barefoot, through the desert. Another video posted online later showed more than 150 men, also in their underwear, lying motionless - apparently dead - in a row in the sand.

While the videos could not be independently confirmed by the AP, they appeared to illustrate the claims made online by ISIS supporters and Syrian activists about the mass killing.

There was no immediate comment from the Syrian government.

According to jihadist tweets and social media, the second American was not killed in Syria but was killed in Iraq on or around August 17.

CBS News national security correspondent David Martin reports that U.S. forces have hit ISIS targets in Iraq and Syria could be next.

Speaking before a meeting with his national security advisors, President Obama said degrading Islamic State militants is going to require a "regional strategy" and assistance from partners in the Middle East.

He said it's time for states in the region to "stop being ambivalent" about the aims of such extremist groups.

Obama played down the prospect of imminent U.S. military action in Syria on Thursday, saying "we don't have a strategy yet" for defeating ISIS.

The Wednesday meeting is to to discuss options for going after the militant group. The U.S. is already going after militant targets inside Iraq and officials say Obama is considering taking similar action in Syria.

The surveillance missions expected to begin flying over Syria are a major step toward launching airstrikes against ISIS bases there. A senior Pentagon official said this week that one of the primary objectives of the missions is to determine how ISIS commands and controls its forces - who are its senior leaders and how do they communicate?

Syria has warned the U.S. not to fly over its territory, but its air defenses are trained on its archenemy, Israel, and are not considered a serious threat in the part of the country where American planes will be flying.

In its rise to prominence over the past year, ISIS has frequently published graphic photos and videos of everything from beheadings to mass killings.

In Iraq, for example, the group killed nearly 200 men - most of them Iraqi soldiers - in late June near the northern city of Tikrit, human rights groups and Iraqi officials say. It published photos online showing dozens of men dressed in civilian clothes lined up or lying face down as militants aimed rifles at their backs. A final set of photos showed their bloodied bodies.

Such killings have not been limited to Iraq. Earlier this month, ISIS fighters shot and beheaded hundreds of tribesmen in eastern Syria who had risen up against the group.

A U.N. commission accused ISIS Wednesday of committing crimes against humanity in Syria - echoing U.N. accusations against the group in Iraq.

ISIS' surge is one aspect of Syria's multi-layered civil war, a bloody conflict that has killed more than 190,000 people and destabilized the region.

The 43 U.N. peacekeepers were detained by an armed group early Thursday in the Golan, where fighting has raged this week between Syrian rebels and government forces.

The office of U.N. Secretary-General Ban Ki-moon did not identify the armed group that is holding the peacekeepers. Several rebel groups operate in the Golan, while the Islamic State group has no known presence there.

The U.N. said another 81 peacekeepers are "currently being restricted to their positions" in the vicinity of Ruwaihaniyeh and Burayqa.

The statement from Ban's office said the U.N. "is making every effort to secure the release of the detained peacekeepers," who are part of UNDOF, the mission that has been monitoring a 1974 disengagement accord between Syria and Israel after their 1973 war.

As of July, UNDOF had 1,223 troops from six countries: Fiji, India, Ireland, Nepal, Netherlands and the Philippines.

Heavy fighting has engulfed the Syrian side of the Golan since Wednesday, when rebels captured a crossing on the disputed frontier with Israel. A rebel spokesman said the opposition is focused on fighting President Bashar Assad, and poses no threat to Israel.

On Thursday, government warplanes targeted several rebel positions in the area, including in the village of Jaba, the Observatory said. The Local Coordination Committees, another activist group, also reported the air raids.

The Observatory said heavy clashes were raging between the rebels and the Syrian military in Jaba and the surrounding countryside.

White plumes of smoke set off by exploding mortar rounds could be seen on Thursday from the Israeli side of the Golan. The sound of small arms fire could be heard echoing in the background.