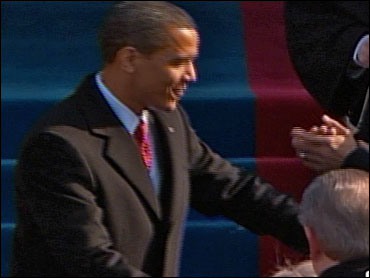 I hate to say it, but I am having a hard time believing Barack Obama. I want to give the guy a break, but he keeps saying one thing over and over. He keeps trying to sell something to us that we may not want to buy.

During his campaign, his motto was "Yes we can."

Today, his motto is, "The worst is yet to come."

Me, I don't believe it. I have covered presidential inaugurals since Jimmy Carter's in 1977 and I have never seen so much hope, so much optimism and so much sheer joy as in Washington this week.

Even some Republicans who voted for John McCain are telling me how happy they are that Barack Obama won. It is like the nation has received a giant shot of adrenalin, that all things are possible, and happy days will soon be here again.

Which is exactly what Obama is worried about. For weeks he has been trying to talk Americans out of what he feels is their irrational exuberance. Never has an incoming president sold gloom so hard.

On Dec. 7 on "Meet the Press," Obama said: "If you look at the unemployment numbers that came out yesterday, if you think about almost 2 million jobs lost so far, if you think about the fragility of the financial system… this is a big problem, and it's going to get worse."

And just in case anybody missed his point, Obama said later in the same interview: "Things are going to get worse before they get better."

Now he adopted that phrase as a mantra. On Dec. 22, introducing his new economic team, Obama said: "We are facing a crisis of historic proportions. The economy is likely to get worse before it gets better. Full recovery will not happen immediately."

In his weekly radio address on Jan. 10 he said, "Recovery won't happen overnight, and it's likely that things will get worse before they get better."

On his whistle-stop tour on Saturday, he began in Philadelphia with a cheery, "Only a handful of times in our history has a generation been confronted with challenges so vast. An economy that is faltering. Two wars, one that needs to be ended responsibly, one that needs to be waged wisely. A planet that is warming from our unsustainable dependence on oil."

He followed this in Wilmington with: "Together, we know that America faces its own crossroads - - a nation at war, an economy in turmoil, an American Dream that feels like it's slipping way."

And then Sunday at the Lincoln Memorial, he added a peppy: "Millions of Americans are losing their jobs and their homes; they're worried about how they'll afford college for their kids or pay the stack of bills on their kitchen table. And most of all, they are anxious and uncertain about the future -- about whether this generation of Americans will be able to pass on what's best about this country to our children and their children."

Politically, this is smart. It is a lot smarter than what George W. Bush said at his first news conference following his reelection in 2004. "I earned capital in the campaign, political capital, and now I intend to spend it; it is my style," Bush said. "You've heard the agenda: Social Security and tax reform, moving this economy forward, education, fighting and winning the war on terror."

So how did that work out exactly?

Obama is smart enough to know you don't brag about your political capital. You spend it quietly with results that make a big noise, when the time is ready, in public.

And until then, you prepare people for the worst, while always reminding them that in the end we will not only survive but prevail.

"There is no doubt that our road will be long, that our climb will be steep," Obama said at the Lincoln Memorial. "But never forget that the true character of our nation is revealed not during times of comfort and ease, but by the right we do when the moment is hard."

The moment is hard. But it is equally hard not to believe that hope is at hand.
By Roger Simon