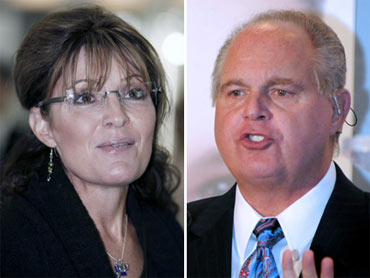 (AP)
Former Alaska Gov. Sarah Palin's criticism of the use of the word "retarded" continues, and this time conservative talk show host Rush Limbaugh appears to be in the crosshairs.

It all started a few days ago when Palin called for White House chief of staff Rahm Emanuel to be fired for reportedly calling liberals "F-ing retarded" at an August meeting.

"Our president is doing himself a disservice by seeming to condone Rahm's recent sick and offensive tactic," Palin said in a Facebook note. Palin's youngest child, Trig, has Down Syndrome.

Emanuel apologized and has been under fire from advocates for people with intellectual disabilities. He met with some of them at the White House on Wednesday to try to make amends.

But the story did not end there, as Palin has now also criticized members of her own party as well. Yesterday, a Palin spokesman condemned use of the word "retarded" by an aide to Texas Gov. Rick Perry.

And now, there is a possible storm brewing between Palin and Limbaugh after Limbaugh repeatedly used the "R-Word" in discussing Emanuel's meeting on Wednesday.

Greg Sargent of The Plum Line blog, which is owned by The Washington Post, got a statement on Limbaugh from Palin spokesperson Meghan Stapleton.

"Governor Palin believes crude and demeaning name calling at the expense of others is disrespectful," Stapleton said.

The headline for Sargent's blog post was "Palin Camp Rips Limbaugh, Hits His 'Retard' Comment As 'Crude And Demeaning,'" which apparently upset the Palin camp because it suggested a feud between the former Republican vice presidential nominee and the popular conservative radio host.

Stapleton denied that Palin was at war with Limbaugh in a statement given to Fox News.

"The Washington Post is trying hard to take the pressure off the White House by creating a side controversy, but it is missing the point: as the Governor has said, it doesn't matter who says the 'r' word: it should no longer be part of our lexicon," she said.

In the past Palin has complained of some people's propensity to be overly politically correct, lauding talk show host Michael Reagan for his willingness "to screw the political correctness that some would expect him to try to adhere to."