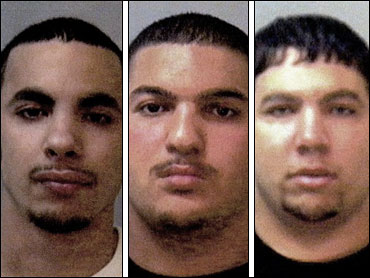 Last winter, federal authorities warned local officials to be on the lookout for anyone buying large numbers of prepaid cell phones — devices that could become potential tools for terrorists.

Authorities in Michigan and Ohio clearly listened: In the space of only a few days last week, they arrested five men and charged them with terrorism-related offenses.

But in the days since, the two cases have grown problematic.

On Monday, an Ohio prosecutor said he was dropping the charges he brought against two men because he could not prove a terrorism link.

And the FBI said Monday it had no information to indicate that three men arrested in Michigan had direct terror ties. The three men were stopped in a van that contained about 1,000 cell phones and photos of the Mackinac Bridge.

Prosecutors in Michigan, however, were standing by the charges against the three Palestinian-American men living in Texas, though they have not said what they believe the men intended to do with the phones.

Officials have said various illegal acts can be committed with prepaid cell phones, including using them as detonators, communicating among terrorists and using the batteries to make methamphetamine.

The surveillance charge was connected to photos of the bridge found on their digital camera, but William Kowalski, assistant special agent in charge of the FBI's Detroit office. He said there was no imminent threat to the bridge.

Separately, Michigan State Police Director Col. Peter Munoz, who heads the state's homeland security efforts, said there was no indication the men were plotting to blow up the Mackinac Bridge "or target any other location in Michigan or elsewhere."

The suspects said the cell phone purchases were a business activity in which they resold the phones at a profit.

Their lawyer, Nabih Ayad, told the Detroit News that the men traveled from state to state buying the cell phones because they were more expensive in Texas and because many stores place limits on the number of phones that can be purchased.

"They were in Wisconsin and they drove to the [Upper Penninsula] and then down here," Ayad told the News. "The Mackinac Bridge was an amusement to them. On the camera there's 50 pictures, 20 of the bridge. The rest are a deer, ducks, flowers and trees."

Ayad also said their families in Dallas. were suffering because of the arrests. "People are driving by and yelling, calling them terrorists," he said.

Speaking in Chicago, Attorney General Alberto Gonzales took a different view: "I don't know how many of you have ever gone to a store to purchase 80-100 cell phones at a time. I would consider that somewhat unusual and I think it would be perfectly legitimate to say, 'Hey, is there something going on here?'"

Tuscola County Prosecutor Mark E. Reene, who charged the three men, would not comment on the status of the case. Representatives of his office and Caro police have consulted with officials from the FBI, the Department of Homeland Security and the U.S. attorney's office.

Meanwhile, in Ohio, Washington County Prosecutor James Schneider said he did not have enough evidence to prove that Ali Houssaiky and Osama Sabhi Abulhassan, both of Dearborn, Mich., had any link to terrorism.

The two 20-year-olds still face a misdemeanor charge of falsification — accused of lying about why they bought the phones. Felony charges of money laundering in support of terrorism and soliciting or providing support for acts of terrorism will be dropped, Schneider said.

Houssaiky and Abulhassan were arrested Aug. 8 in Marietta, Ohio, after they aroused suspicions by buying large numbers of prepaid cell phones, officials said.

The Texas men, Muhareb, Adham Othman and Louai Othman, were arrested Friday in Caro after purchasing 80 cell phones at a Wal-Mart, police said. Authorities said they found nearly 1,000 phones in their van.

The FBI and the U.S. Department of Homeland Security sent out joint bulletins in February and March to police departments nationwide warning about the bulk purchase of phones for personal profit or financing terrorism.