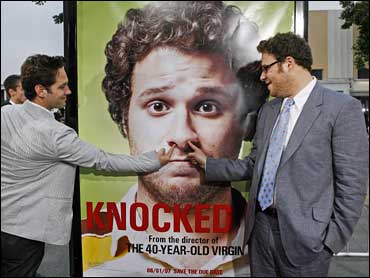 A Canadian author has sued NBC Universal and director Judd Apatow claiming they ripped off the premise of the hit movie "Knocked Up" from her book of the same name.

In an article for Maclean's magazine this month, Calgary-based author Rebecca Eckler details similarities between her book and the film, in which an up-and-coming television reporter gets drunk at a party and then gets pregnant from a one-night stand.

Eckler writes that in her 2004 book, she's an up-and-coming newspaper reporter who gets drunk and "knocked up" after celebrating at her engagement party.

She claims that while pitching her book to Hollywood producers, she learned of Apatow's project and the script, which she says had on it a picture of a martini glass with a pacifier around the stem — the same as the cover of her book.

Apatow said in a statement through his representatives that the book and film were very different.

"Anyone who reads the book and sees the movie will instantly know that they are two very different stories about a common experience," said the statement posted on celebrity Web site TMZ.com.

The lawsuit claiming copyright infringement was filed in U.S. District Court in Central California in January and seeks unspecified damages.