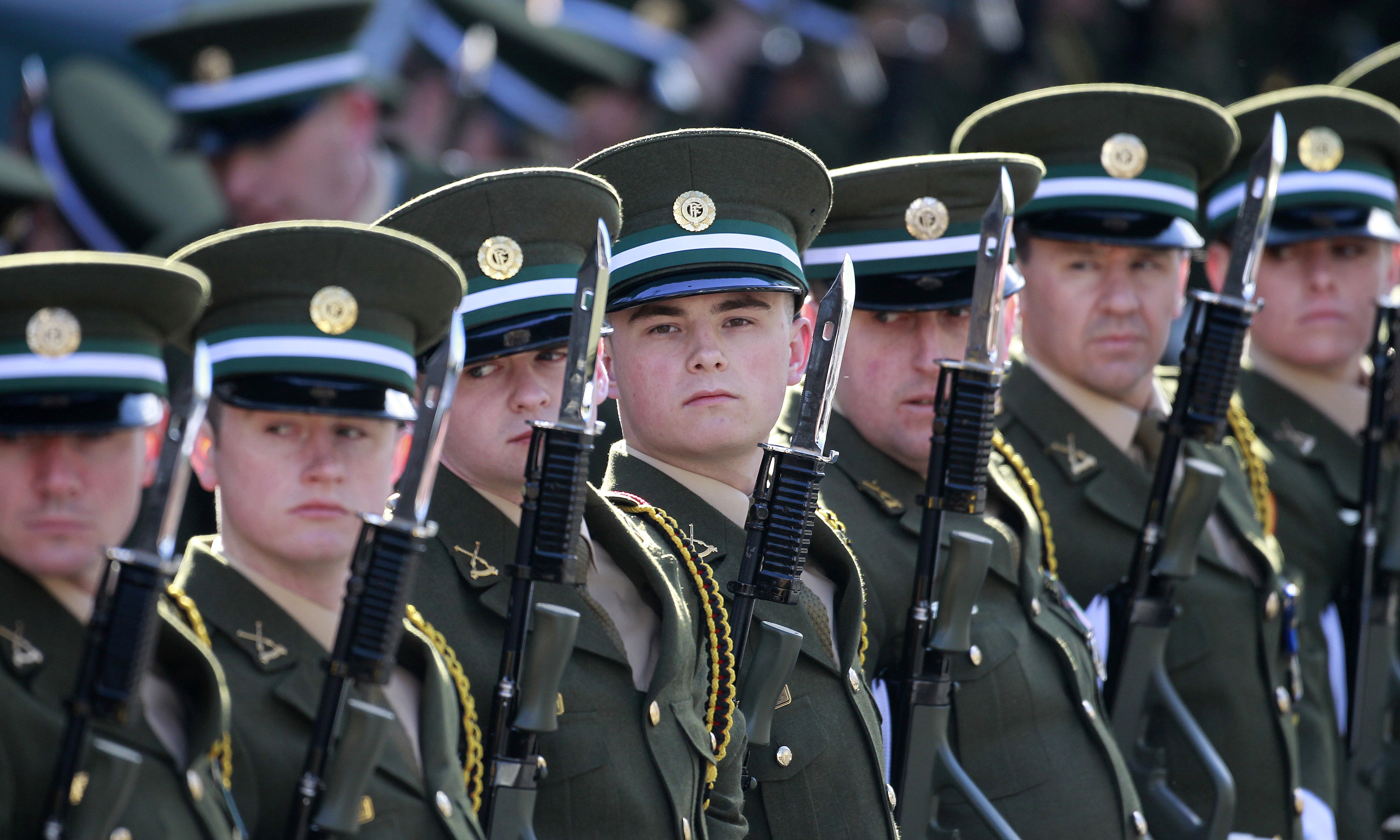 DUBLIN -- Thousands of soldiers marched solemnly through the crowded streets of Dublin on Sunday to commemorate the 100th anniversary of the Easter Rising against Britain, a fateful rebellion that reduced parts of the capital to ruins and fired the country's flame of independence.

The Easter parade through Dublin featured military ceremonies at key buildings seized in 1916, when about 1,200 rebels sought to ignite a popular revolt against Ireland's place in the United Kingdom.

The five-hour procession paused at noon outside the colonnaded General Post Office on O'Connell Street, the rebel headquarters a century ago, where commander Padraig Pearse formally launched the revolt by proclaiming to bemused Dubliners the creation of a "provisional" Republic of Ireland.

"In the name of God and of the dead generations from which she receives her old tradition of nationhood, Ireland, through us, summons her children to her flag and strikes for her freedom," Kelleher said to an audience that included Ireland's leaders and scores of grandchildren of the rebels.

Many donned their ancestors' Easter Rising bronze service medals, which Ireland issued in 1941 on the rebellion's 25th anniversary.

British forces, among them many Irishmen focused on fighting Germany in World War I, were caught off guard by the seizure of largely unguarded buildings in 1916. Most officers were attending horse races in the Irish countryside. But Britain quickly deployed army reinforcements who were cheered by some locals as they marched into Dublin. Artillery based at Trinity College and a gunboat on the River Liffey which bisects the city shelled the post office and other rebel strongholds, forcing their surrender within six days.

The fighting left nearly 500 dead, most of them civilians caught in the crossfire or shot -- by both sides -- as suspected looters. Some 126 British soldiers, 82 rebels and 17 police were slain.

Many Dubliners opposed the insurrection as an act of treason in a time of war, but public sentiment swiftly swung in the rebels' favor once a newly arrived British Army commander decided to execute Pearse and 14 other rebel leaders by firing squad in Dublin's Kilmainham Jail.

A 16th figure, Roger Casement, who days before the Easter Rising was caught trying to smuggle German weapons by sea to Ireland, was hanged inside a London prison.

In the rebellion's immediate wake, the poet W.B. Yeats reflected Ireland's conflicted feelings about how violent nationalism appeared to be hastening Ireland's journey to political freedom but at a debatable cost. His "Easter, 1916" poem, among the most quoted works in all of Irish literature, listed the names of executed Rising commanders and concluded that Ireland had "changed, changed utterly: A terrible beauty is born."

A treaty accepted by most southern rebels established an Irish Free State in 1922 that grudgingly accepted the reality of the island's partition. The new Irish state survived a fratricidal 1922-23 civil war between IRA factions. Michael Collins' pro-treaty forces crushed IRA die-hards who, backed by Eamon de Valera, rejected the treaty because the new state was not fully independent of Britain. Both men had fought in the 1916 Rising.

Ireland remained neutral in World War II and declared itself a republic on Easter Monday 1949.

Ireland long has struggled to embrace Easter as its effective independence day, in part because the enemy camps from the Irish civil war forged the country's two dominant political parties: Fine Gael by allies of the slain IRA leader Collins; and de Valera's Fianna Fail party. Both parties claim to be the true defenders of the 1916 rebels' ideals.

Official unease with 1916's disputed legacy grew from the early 1970s as a new Belfast-based IRA launched a ruthless campaign to force Northern Ireland out of the U.K. and into the republic. This outlawed faction called itself the Provisional IRA and killed nearly 1,800 people before calling a 1997 cease-fire to support leaders of its revived Sinn Fein party, who today help govern Northern Ireland alongside British Protestant politicians.

In a sign of changing times, leaders of Fine Gael, Fianna Fail and Sinn Fein stood side by side at Sunday's events, including a ceremony inside Kilmainham Jail, where Pearse and other commanders were executed.

Sunday's commemorations are the centerpiece of an estimated 2,500 events nationwide this spring and summer reflecting on the uprising's legacy.

The anniversary date is imprecise, given that Easter falls on different dates each year and the 1916 rebellion actually started on Easter Monday -- an official holiday in Ireland -- not on the Sunday. The rebellion began April 24 and ended on April 29, 1916. The executions began four days later.