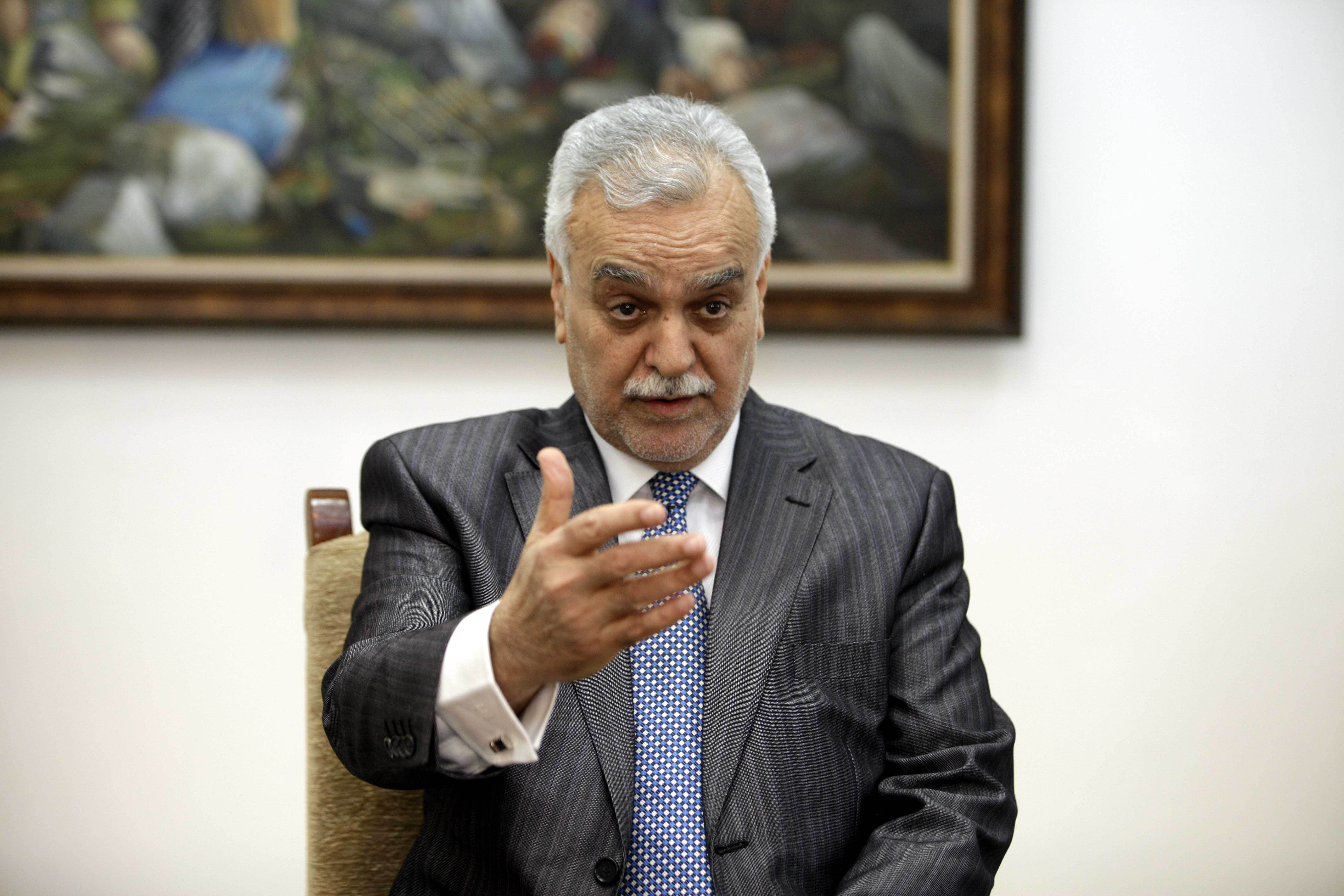 (AP) BAGHDAD - Iraq's fugitive Sunni vice president was sentenced Sunday to death by hanging on charges he masterminded death squads against rivals in a terror trial that has fueled sectarian tensions in the country. Underscoring the instability, insurgents unleashed an onslaught of bombings and shootings across Iraq, killing at least 92 people in one of the deadliest days this year.

It's unlikely that the attacks in 13 cities were all timed to coincide with the afternoon verdict that capped a monthslong case against Vice President Tariq al-Hashemi, a longtime foe of Shiite Prime Minister Nouri al-Maliki. Still, taken together, the violence and verdict could energize Sunni insurgents bent on returning Iraq to the brink of civil war by targeting Shiites and undermining the government.

Al-Hashemi fled to Turkey in the months after the Shiite-led government accused him of playing a role in 150 bombings, assassinations and other attacks from 2005 to 2011 - years in which the country was mired in retaliatory sectarian violence that followed the 2003 U.S.-led invasion that ousted Saddam Hussein's Sunni regime. Most of the attacks were allegedly carried out by al-Hashemi's bodyguards and other employees, and largely targeted government officials, security forces and Shiite pilgrims.

The vice president declined to immediately comment on the verdict after meeting with the Turkish Foreign Minister Ahmet Davutoglu in Ankara. He said he would "tackle this issue in a statement" in coming hours.

The politically charged case - which was announced the day after U.S. troops withdrew from the country last December - sparked a government crisis and fueled Sunni Muslim and Kurdish resentment against al-Maliki, whom critics say is monopolizing power.

Violence has ebbed significantly, but insurgents continue to stage high-profile bombings and shooting rampages. Al-Qaida's Iraq branch has promised a comeback in predominantly Sunni areas from which it was routed by the U.S. and its local allies after sectarian fighting peaked in 2007.

"These attacks show al-Qaida's ability to hit any place in Iraq and at any time," said Ali Salem, 40, an elementary school teacher in Baghdad. "The lack of security could take us back to zero."

The worst violence on Sunday struck the capital, where bombs pounded a half-dozen neighborhoods - both Sunni and Shiite - thoughout the day. But the deadliest attacks in Baghdad hit Shiite areas Sunday evening, hours after the al-Hashemi verdict was announced. In all, 42 people were killed in the capital and 120 wounded, according to police and hospital officials who spoke on condition of anonymity because they were not authorized to release the information.

The countrywide attacks began before dawn, with gunmen killing soldiers at an army post in the central Iraqi city of Dujail. A few hours later, a car exploded in a lot where police recruits waiting in line to apply for jobs outside Kirkuk in the country's north. Both Dujail and Kirkuk are former insurgent strongholds.

Over the day, at least 92 people were killed and more than 360 wounded in at least 21 separate bombings and shootings, according to reports from police and hospital officials. No group immediately claimed responsibility, but Iraq's Interior Ministry blamed al-Qaida in Iraq.

"The attacks today on the markets and mosques are aimed at provoking sectarian and political tensions," the ministry said in a statement. "Our war against terrorism is continuing, and we are ready."

The courtroom at Baghdad's criminal court was silent Sunday as the presiding judge read out the verdict. It convicted al-Hashemi and his son-in-law, Ahmed Qahtan, of organizing the murders of a Shiite security official and a lawyer who had refused to help the vice president's allies in terror cases. The two defendants were acquitted in a third case of the killing of a security officer due to a lack of evidence.

The court sentenced both men in absentia to death by hanging. They have 30 days to appeal the verdict and could win a retrial if they return to Iraq to face the charges. Al-Hashemi - who has been in office since 2006 - is on Interpol's most-wanted list, but Turkey has shown no interest in sending the vice president back to Baghdad.

The defense team began its closing statement with a searing indictment of Iraq's justice system, accusing it of showing no independence and siding with the Shiite-led government.

"From the beginning and through all procedures it has become obvious that the Iraqi judicial system has been under political pressure," attorney Muayad Obeid al-Ezzi, the head of the defense team, told the court.

The presiding judge immediately interjected, warning that that the court would open legal proceedings against the defense team if it continued to heap accusations on the court or the legal system.

Reaction to the verdict was largely along sectarian lines on the streets of Baghdad.

Sunni lawyer Abdullah al-Azami called the trial "another farce to be added to the Iraqi judicial system."

Shiite pharmacist Khalid Saied, meanwhile, said he supported the verdict and hoped the government would broadcast all the evidence against al-Hashemi "so that the entire world knows him."

Sunday's violence came amid fears that the insurgency has gained new strength after suffering heavy setbacks in U.S. and Iraqi offensives. Four of the attacks targeted Kirkuk, where city police commander Brig. Gen. Sarhad Qadir blamed the violence on al-Qaida.

The carnage stretched into the country's south, where bombs stuck to two parked cars exploded in the Shiite-dominated city of Nasiriyah, 320 kilometers (200 miles) southeast of Baghdad. The blasts were near the French consulate and a local hotel in the city, although the consulate did not appear to be a target of the attack.

A string of smaller attacks Sunday also struck nine other cities. It was one of the worst outbreaks of violence in Iraq in 2012, although the single deadliest day was July 23, which saw at least 115 people killed - the most in more than two years.