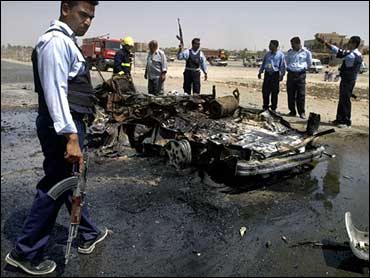 A suicide attacker detonated explosives strapped to his body Saturday at a gas station near a Shiite mosque south of Baghdad, triggering a huge explosion in a fuel tanker and killing at least 54 people, police said.

Police and witnesses said the fuel tanker was moving slowly toward the pumps when an attacker ran to it and detonated his explosives. The station is located in the center of town near a cluster of houses, many of which caught fire, the witnesses said.

Gasoline stations in Iraq typically include a number of small businesses selling tea, soft drinks and snacks and often are crowded with people.

Musayyib is a religiously mixed town along the Euphrates River in the "triangle of death," an area that has experienced a large number of kidnappings and killings of Shitte Muslims traveling between Baghdad and the Shiite holy cities of Karbala and Najaf.

CBS News Correspondent Kimberly Dozier reports that in the past two days, there have been at least 11 suicide bombings in Baghdad?and more attacks north and south.

Meanwhile, 11 U.S. soldiers have been charged with assaulting detainees in Iraq, the military said Saturday, while three British soldiers were killed by a roadside bomb in a rare attack in the relatively stable southern part of the country.

The soldiers had been assigned to the Army's Task Force Baghdad but were taken off-duty pending the investigation, the military said, adding that the Army's Criminal Investigation Division would determine whether they should face trial by court-martial.

U.S. commanders have been especially sensitive about alleged mistreatment of detainees since the abuse of inmates at Abu Ghraib prison resulted in a major scandal involving America's handling of prisoners both here and in Guantanamo Bay, Cuba.

The attack against the British occurred as the troops were on patrol about 2:30 a.m. in the city of Amarah in Maysan province, 180 miles southeast of Baghdad. Three British troops were killed and two wounded, according to Britain's Ministry of Defense.

"The bravery of our armed forces was yet again underlined as they help Iraq and its people towards the democracy they so desperately want," Blair said Saturday.

The fatalities brought to 92 the number of British servicemen who have died since the Iraq war started in March 2003. Britain has about 8,500-troops in the country, mostly based in the largely Shiite south, where support for the Shiite-led government in Baghdad is stronger.

British losses have been far fewer than those suffered by the larger U.S. force, which is bearing the brunt of the fight against Sunni Arab insurgents in northern, western and central Iraq. At least 1,763 members of the U.S. military have died since the war started.

In other violence Saturday, a suicide attacker detonated an explosive belt inside a police station 10 miles south of the northern city of Mosul, killing six policemen and wounding 20 others, Brig. Gen. Saeed Ahmed said.

Elsewhere in the capital, a suicide car bomber struck near a U.S. military convoy in the southeast of the city, setting a Humvee ablaze, police Lt. Col. Hassan Salloub said. No U.S. casualties were reported.

The attacks came a day after a wave of suicide car bombs and explosions targeting U.S. and Iraqi security forces rocked the capital, killing at least 33 people and wounding at least 111, including seven American soldiers.

One of the bombings hit after sundown on a bridge over the Tigris River near the home of President Jalal Talabani. Four security guards were killed and nine people were wounded in that attack. Talabani was at home at the time, aides said, but the target may have been a U.S. convoy.

Al Qaeda's wing in Iraq claimed responsibility in Internet statements for several of the attacks, but the authenticity could not be confirmed.

The would-be bomber arrested Saturday in Baghdad said he was Libyan, according to police Lt. Mohammed Jassim.

Jassim said police grew suspicious of the man, stopped him and discovered the explosives belt.

On Thursday, Iraqi and U.S. forces captured another suicide bomber before he could detonate his explosives belt as part of coordinated assaults just 150 feet from the Green Zone, the site of the U.S. Embassy and major Iraqi government offices.

A car bomb exploded successfully. But one pedestrian bomber was killed after an Iraqi policeman shot him, setting off his explosive vest. Five policemen and four civilians were wounded by the blasts and gunfire.