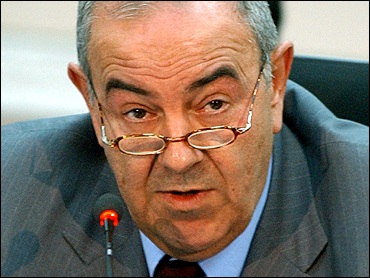 Twenty nations, including the United States, Iraq's neighbors and Arab countries opened a conference on Iraq on Monday, urging the government to meet with its opponents to get them to take part in the general elections.

The two-day international conference is expected to give strong backing to Iraq's war on insurgents and won't set a deadline for the withdrawal of U.S.-led multinational forces, according to a draft of its final statement, obtained by The Associated Press.

Iraq had asked Egypt to convene the conference, being held in the Sinai resort of Sharm el-Sheik, in a bid to bolster world support for its battle against insurgents and its plan to hold national elections. France and some Middle Eastern countries have pressed for a firm date for U.S.-led forces' departure, and some in the Arab world have opposed the crackdown on Iraq's rebellion, seen in some quarters as resistance to foreign occupation.

In what could be the most contentious part of the conference, Iraq has said it will present plans for neighboring states to tighten their borders against the infiltration of would-be insurgents and to share information about groups supporting the militants.

In an interview with AP in Baghdad, Iraqi Prime Minister Ayad Allawi said neighboring countries have not done enough to help Iraq.

"Certainly, some brothers and leaders in some neighboring nations did not do enough," Allawi said just before the conference opened. "They should have tried to help us at a time when we needed help."

But he added: "We look forward to having positive and balanced ties with all our neighbors without exception. And we expect these nations and their leaders to do the same."

The meeting brings together Iraq's neighbors, including Iran, plus Egypt and several other Arab countries, as well as China and regional bodies such as the Group of Eight, United Nations, European Union, Arab League and the Organization of the Islamic Conference.

Syria's Foreign Minister Farouk al-Sharaa toured the region seeking support for setting a deadline for withdrawing foreign forces. But the draft text leaves it to the Iraqi government to decide when the troops should depart, while at the same time reminding the U.S.-led multinational force that its mandate is "not open-ended."

For all its bloodshed, the insurgency enjoys a certain support in the Arab world, with many there seeing the multinational troops as occupiers. Nine Arab governments are represented at the 20-nation conference.

The conference is expected to condemn "all acts of terrorism in Iraq" and call for "the immediate cessation of all such acts in order to alleviate the suffering of the Iraqi people."

The draft communique said participants will also urge the interim government to deal firmly with terrorists according to international standards of law.

The conference appears to urge the Iraqi government to do everything it can to persuade its opponents to take part in the Jan. 30 elections.

"The ministers encourage the interim government of Iraq to convene in Iraq, at the earliest date, before the general elections, representatives of the Iraqi political spectrum and civil society ... with the view to encouraging broader participation in the general elections," the communique said.

One government opponent, the Association of Muslim Scholars, has called for an election boycott. In a statement Sunday, the Sunni Muslim group dismissed the conference as "an attempt to legitimize the occupation."

Allawi said his government was determined to hold the election as scheduled, describing those calling for a boycott as "the eventual losers" and "a small minority."

France, which opposed the invasion of Iraq, had urged the conference to invite representatives of the Iraqi opposition. Such groups are not attending, but Egyptian Foreign Minister Ahmed Aboul Gheit said the views of the Association of Muslim Scholars will be aired. "Once their letter is received, it will be presented to the conference," Aboul Gheit said.

It remained unclear if any of the nine Arab governments at the conference is working behind the scenes to persuade Iraqi Sunni leaders not to boycott the elections.

Delegates say the conference will encourage the Arab League to play a more positive role in Iraq. The 22-nation body has long held back because of its opposition to the invasion and occupation.

The draft of the final text said the conference "welcomes the role played by all concerned parties, including those of regional organizations, especially the League of Arab states, to create an environment conducive to security and stability in the region. The ministers encourage measures aimed at building confidence in Iraq."

Secretary of State Colin Powell was scheduled to arrive at the Red Sea resort of Sharm El-Sheik after talks with Israeli and Palestinian leaders. Powell will discuss steps to revive the Israeli-Palestinian peace process in a meeting with representatives of the other three members of the "Quartet" group, an Egyptian Foreign Ministry spokesman said.

Media reports suggested Powell might meet Iranian Foreign Minister Kamal Kharrazi on the sidelines of the conference, but Iran's Foreign Ministry has denied any meeting is planned.