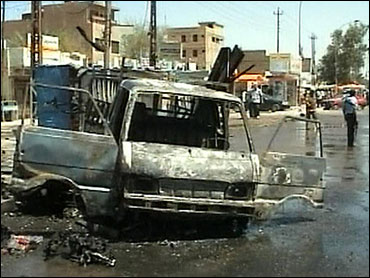 An Iraqi journalist whose newspaper is accused by insurgents of having published U.S. propaganda was killed late Tuesday in a drive-by shooting in Fallujah.

Police identify the victim as Ibrahim Seneid, an editor at the al-Bashara newspaper.

Dozens of journalists have been injured, killed or kidnapped in Iraq since the 2003 U.S.-led invasion that toppled Iraqi dictator Saddam Hussein, who is now on trial for killing opponents of his regime while he was still in power.

The trial, in Baghdad, resumes on June 19th.

Before Tuesday's attack, the New York-based Committee to Protect Journalists had put the number of journalists killed in Iraq at 73, including 52 Iraqis and two CBS journalists, James Brolan and Paul Douglas.

In Baghdad Wednesday, a car bomb in a parked car blew up in the northern part of the city, killing at least four civilians and wounding six others. The explosion happened at about 11 a.m. in the Qahira district, despite a widespread deployment of thousands of Iraqi officers in an effort to bolster security in the wake of the June 7th killing of al Qaeda in Iraq terror group leader Abu Musab al-Zarqawi.

The al-Zarqawi killing has governments all around the world on the alert. Wednesday, authorities in Germany announced the arrest of an Iraqi suspected of transferring money to Ansar al-Islam, a radical Islamic group in Iraq which has been linked to al Qaeda.

Prosecutors say the 36-year-old man, identified only as Burhan B., was arrested Monday at the airport in Frankfurt on suspicion of supporting a foreign terrorist organization and violating German export laws. He is accused of having given over $27,000 to Ata A. R., a suspected ringleader of Ansar al-Islam's European network. Ata A. R. is to go on trial in Stuttgart next week in connection with an alleged 2004 plot to kill then-Iraqi Prime Minister Ayad Allawi during a visit to Germany.

Ansar al-Islam and its successor, Ansar al-Sunna, are suspected of a string of deadly attacks on U.S. troops and Iraqi police as well as foreign embassies, international organizations and rival Iraqi groups.

Iraqi and multinational troops fanned out early Wednesday for the beginning of a security operation they are describing as the biggest of its kind in Baghdad since the U.S. handed over sovereignty to Iraq in June 2004.

Security officials said 75,000 Iraqi and multinational forces would be deployed throughout Baghdad, securing roads, launching raids against insurgent hideouts and calling in airstrikes if necessary.

Iraqi Prime Minister Nouri al-Maliki promised Tuesday to show "no mercy" to terrorists and said his long-awaited security plan for Baghdad will include a curfew and a ban on personal weapons.

Mr. Bush's visit came on the final day of a two-day work session aimed at keeping up the momentum generated by last week's swearing-in of key Iraqi national security officials, and the U.S. airstrike that killed Abu Musab al-Zarqawi, the leader of al Qaeda in Iraq.

He warned insurgents were likely to step up activity ahead of the security crackdown and as revenge for al-Zarqawi's death. He said the ground forces could call in air cover if needed.

"We are expecting clashes will erupt in the predominantly Sunni areas," he said. "The terrorists will escalate their violence especially during the first week as revenge for the killing of al-Zarqawi."

He also said; "Baghdad is divided according to geographical area and we know the al Qaeda leaders in each area."

Iraqis have complained of random violence and detentions by Iraqi forces, especially the police, which are widely believed to have been infiltrated by so-called sectarian death squads.

Al-Gharrawi said there are plans for a single uniform to distinguish legitimate forces in the coming days.

"There will be a special uniform with special badges to be put on the vehicles as a sign that it belongs to our forces," he said, adding the prime minister would decide when to end the crackdown.

"The terrorists cannot face such power," he said.