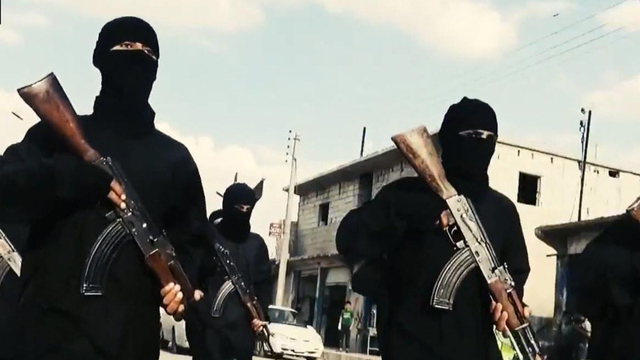 The Islamic State of Iraq and Syria (ISIS) is posing a problem well beyond the confines of the two Middle Eastern countries where it has a territorial foothold, raising questions about whether the administration's strategy is sufficient to fight the group beyond its current borders.

Earlier this week, a video released by militants in Libya claiming an affiliation with ISIS appeared to show the mass beheading of 21 Egyptian Coptic Christian hostages. Egypt sent warplanes over the border to bomb ISIS targets in Libya the next day. The group is also gaining beachheads in other parts of the world, with groups claiming allegiance to ISIS in the Sinai, Afghanistan and the Kashmir region.

"Some of this is more formal than in other places, but the reality is that the mythology, the allure of the Islamic State is taking hold," said CBS News Senior National Security Analyst Juan Zarate. "You're beginning to see the inkblots of the group emerge around the world."

The problem, Zarate said, is that the administration's current request to Congress for authorization to fight the militants is focused primarily on the ongoing battle inside Iraq and Syria. Mr. Obama is looking for three years of authorization, and while it has no restrictions on where U.S. forces could pursue the threat, the proposal bans "enduring offensive combat operations."

Despite the calls of some lawmakers like Sen. Lindsey Graham, R-South Carolina, to put U.S. combat troops on the ground in the region to fight ISIS, Mr. Obama has pursued a strategy in which the U.S. and other allies support Kurdish and Iraqi forces on the ground with only air power.

"The Obama administration has talked about strategic patience around this threat and, perhaps, others around the world. The reality is that this terrorist threat is morphing and adapting, perhaps, more quickly than our strategy is meeting. So, that's one strategic problem and issue," he said. "This is a global problem, like it or not.

The administration is working to deal with some of the farther-flung threats, such as the radicalization of Americans and Western Europeans who travel to fight with the group. Known as foreign fighters, this group is so dangerous because their American and Western European passports allow them easier access to Western countries. There is a mounting concern about those who become radicalized and carry out attacks in their home countries, as was the case with some of the attacks in Paris last month.

On Wednesday, President Obama spoke to experts from the government and private sector, as well as to local leaders as part of a three-day conference on countering violent extremism. He argued the answer to the problem is "not just a matter of military affairs," saying societies must zero in on the ideologies that inspire violent extremism, and the infrastructure that allows extremists to convert their hatred into action.

Working to combat radicalization in Western nations, however, won't help stop the group from metastasizing across more of the Middle East and North Africa.

"Strategically, we now have to consider what does a more regional, if not global, fight against the Islamic State look like, and how do we marry up the interest of countries like Jordan and Egypt that clearly, now, are at war with the group? And how do we leverage that to actually diminish their reach?" Zarate asked.

It will be difficult to convince members of Congress to coalesce around one strategy. The White House's request for the use of military force was already carefully crafted to define a middle ground between Democrats leery of another protracted Middle Eastern conflict involving ground troops, and Republicans, who largely believe the U.S. needs maximum flexibility to pursue ISIS.

An earlier version of this article incorrectly attributed a quote about the scope of the fight against ISIS to Mr. Obama. It was said by Zarate.