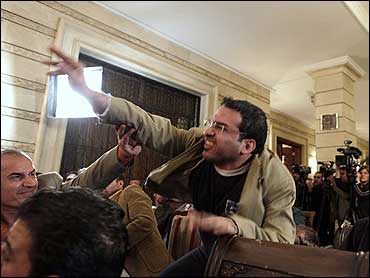 The Iraqi journalist who threw shoes at then-President George W. Bush was convicted Thursday of assaulting a foreign leader and sentenced to three years in prison, lawyers said. He shouted "long live Iraq" when the sentence was read.

The verdict came after a short trial in which Muntadhar al-Zeidi, 30, pleaded not guilty to the charge and said his action was a "natural response to the occupation."

Some of his relatives collapsed and had to be helped out of court. Others were forcibly removed by security forces when they became unruly, shouting "Down with Bush" and "Long live Iraq."

Al-Zeidi could have received up to 15 years in prison for hurling his shoes at Bush last December during a joint press conference with Iraqi Prime Minister Nouri al-Maliki.

But defense lawyers said the judge showed leniency because of al-Zeidi's age and clean record. Many Iraqis consider al-Zeidi a hero for defiantly expressing his anger at a president who they believe destroyed their country after the 2003 U.S.-led invasion. Thousands across the Muslim world took to the streets to demand his release.

Defense lawyers said they would appeal because they believe the action was a legitimate political protest and did not merit prison time.

"This judiciary is not just," al-Zeidi's brother, Dargham, said tearfully.

The journalist has been in Iraqi custody since the Dec.14 news conference where he threw his shoes at Bush, who quickly ducked to avoid being hit. Al-Zeidi was quickly wrestled to the ground by guards and dragged away.

During Thursday's proceedings, al-Zeidi, wearing a beige suit over a brown shirt and brown leather shoes, walked swiftly to the wooden pen where defendants are kept and greeted the panel of three judges with a nod and a wave.

Presiding Judge Abdul-Amir al-Rubaie asked al-Zeidi whether he was innocent or guilty.

"I am innocent. What I did was a natural response to the occupation," the defendant replied.

The proceedings took place under heavy guard with scores of armed policemen inside the courtroom and the Iraqi soldiers who escorted al-Zeidi waiting outside.

The trial began on Feb. 19 but was adjourned until Thursday as the judges weighed a defense argument that the current charge is not applicable because Bush was not in Baghdad on an official visit, having arrived unannounced and without an invitation.

Al-Rubaie on Thursday read a response from the prime minister's office insisting it was an official visit.

Chief defense attorney Dhia al-Saadi then demanded that the charge be dismissed, saying his client's action "was an expression of freedom and does not constitute a crime."

He echoed al-Zeidi's testimony at the previous hearing, saying his client had been provoked by anger over Bush's claims of success in a war that has devastated his country.

"It was an act of throwing a shoe and not a rocket. It was meant as an insult to the occupation," the lawyer said.

"I have great faith in the Iraqi judiciary. It is a judiciary that is both just and has integrity," al-Zeidi responded.

The judge delivered the verdict to the defendant and his attorneys after ordering other people in the audience out of the courtroom.

Many people in the region — angry over the 2003 U.S.-led invasion of Iraq — have embraced al-Zeidi. They have staged large street rallies calling for his release, and one Iraqi man erected a sofa-sized sculpture of a shoe in his honor that the Iraqi government later ordered removed.

When al-Zeidi threw his shoes at Bush, he shouted in Arabic: "This is your farewell kiss, you dog! This is from the widows, the orphans and those who were killed in Iraq."

But al-Maliki was deeply embarrassed by the action against an American president who had stood by him when some Arab leaders were quietly urging the U.S. to oust him.

The journalist's family has raised concerns about his welfare, and he testified earlier that he had been tortured with beatings and electric shocks during his interrogation — allegations the Iraqi government has denied.