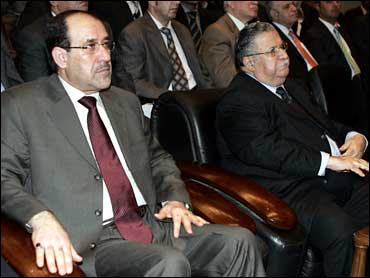 As Congress prepares to receive reports on Iraq from General David Petraeus and U.S. Ambassador Ryan Crocker and readies for a debate on George W. Bush's latest funding request of $50 billion for the Iraq war, the performance of the government of Prime Minister Nouri al-Maliki has become a central and contentious issue.

But according to the working draft of a secret document prepared by the U.S. Embassy in Baghdad, the Maliki government has failed in one significant area: corruption. Maliki's government is "not capable of even rudimentary enforcement of anticorruption laws," the report says, and, perhaps worse, the report notes that Maliki's office has impeded investigations of fraud and crime within the government.

The draft - over 70 pages long - was obtained by The Nation, and it reviews the work (or attempted work) of the Commission on Public Integrity (CPI), an independent Iraqi institution, and other anticorruption agencies within the Iraqi government. Labeled "SENSITIVE BUT UNCLASSIFIED/Not for distribution to personnel outside of the US Embassy in Baghdad," the study details a situation in which there is little, if any, prosecution of government theft and sleaze. Moreover, it concludes that corruption is "the norm in many ministries."

The report, which was drafted by a team of U.S. Embassy officials, surveys the various Iraqi ministries. "The Ministry of Interior is seen by Iraqis as untouchable by the anticorruption enforcement infrastructure of Iraq," it says. "Corruption investigations in Ministry of Defense are judged to be ineffectual." The study reports that the Ministry of Trade is "widely recognized as a troubled ministry" and that of 196 corruption complaints involving this ministry merely eight have made it to court, with only one person convicted.

The Ministry of Health, according to the report, "is a sore point; corruption is actually affecting its ability to deliver services and threatens the support of the government." Investigations involving the Ministry of Oil have been manipulated, the study says, and the "CPI and the [Inspector General of the ministry] are completely ill-equipped to handle oil theft cases." There is no accurate accounting of oil production and transportation within the ministry, the report explains, because organized crime groups are stealing oil "for the benefit of militias/insurgents, corrupt public officials and foreign buyers."

The list goes on: "Anticorruption cases concerning the Ministry of Education have been particularly ineffective….[T]he Ministry of Water Resources…is effectively out of the anticorruption fight with little to no apparent effort in trying to combat fraud….[T]he Ministry of Labor & Social Affairs is hostile to the prosecution of corruption cases. Militia support from [Shia leader Moqtada al-Sadr] has effectively made corruption in the Ministry of Transportation wholesale according to investigators and immune from prosecution." Several ministries, according to the study, are "so controlled by criminal gangs or militias" that it is impossible for corruption investigators "to operate within [them] absent a tactical [security] force protecting the investigator."

The Ministry of the Interior, which has been a stronghold of Shia militias, stands out in the report. The study's authors say that "groups within MOI function similarly to a Racketeer Influenced and Corrupt Organization (RICO) in the classic sense. MOI is a 'legal enterprise' which has been co-opted by organized criminals who act through the 'legal enterprise' to commit crimes such as kidnapping, extortion, bribery, etc." This is like saying the mob is running the police department. The report notes, "currently 426 investigations are hung up awaiting responses for documents belonging to MOI which routinely are ignored." It cites an episode during which a CPI officer discovered two eyewitnesses to the October 2006 murder of Amer al-Hashima, the brother of the vice president, but the CPI investigator would not identify the eyewitnesses to the Minister of the Interior out of fear he and they would be assassinated. (It seemed that the killers were linked to the Interior Ministry.) The report adds, "CPI investigators assigned to MOI investigations have unanimously expressed their fear of being assassinated should they aggressively pursue their duties at MOI. Thus when the head of MOI intelligence recently personally visited the Commissioner of CPI…to end investigations of [an] MOI contract, there was a clear sense of concern within the agency."

Over at the Defense Ministry, the report notes, there has been a "shocking lack of concern" about the apparent theft of $850 million from the Iraqi military's procurement budget. "In some cases," the report says, "American advisors working for U.S. [Department of Defense] have interceded to remove [Iraqi] suspects from investigations or custody." Of 455 corruption investigations at the Defense Ministry, only 15 have reached the trial stage. A mere four investigators are assigned to investigating corruption in the department. And at the Ministry of Trade, "criminal gangs" divide the spoils, with one handling grain theft, another stealing transportation assets.

Part of the problem, according to the report, is Maliki's office: "The Prime Minister's Office has demonstrated an open hostility" to independent corruption investigations. His government has withheld resources from the CPI, the report says, and "there have been a number of identified cases where government and political pressure has been applied to change the outcome of investigations and prosecutions in favor of members of the Shia Alliance"-which includes Maliki's Dawa party.

The report's authors note that the man Maliki appointed as his anticorruption adviser - Adel Muhsien Abdulla al-Quza'alee - has said that independent agencies, like the CPI, should be under the control of Maliki. According to the report, "Adel has in the presence of American advisors pressed the Commissioner of CPI to withdraw cases referred to court." These cases involved defendants who were members of the Shia Alliance. (Adel has also, according to the report, "steadfastly refused to submit his financial disclosure form.") And Maliki's office, the report says, has tried to "force out the entire leadership of CPI to replace them with political appointees" - which would be tantamount to a death sentence for the CPI officials. They now live in the Green Zone. Were they to lose their CPI jobs, they would have to move out of the protected zone and would be at the mercy of the insurgents, militias, and crime gangs "who are [the] subjects of their investigations."

Maliki has also protected corrupt officials by reinstating a law that prevents the prosecution of a government official without the permission of the minister of the relevant agency. According to a memo drafted in March by the U.S. embassy's anticorruption working group-a memo first disclosed by The Washington Post - between September 2006 and February 2007, ministers used this law to block the prosecutions of 48 corruption cases involving a total of $35 million. Many other cases at this time were in the process of being stalled in the same manner. The stonewalled probes included one case in which Oil Ministry employees rigged bids for $2.5 million in equipment and another in which ministry personnel stole 33 trucks of petroleum.

And in another memo obtained by The Nation - marked "Secret and Confidential" - Maliki's office earlier this year ordered the Commission on Public Integrity not to forward any case to the courts involving the president of Iraq, the prime minister of Iraq, or any current or past ministers without first obtaining Maliki's consent. According to the U.S. embassy report on the anticorruption efforts, the government's hostility to the CPI has gone so far that for a time the CPI link on the official Iraqi government web site directed visitors to a pornographic site.

In assessing the Commission on Public Integrity, the embassy report notes that the CPI lacks sufficient staff and funding to be effective. The watchdog outfit has only 120 investigators to cover 34 ministries and agencies. And these investigators, the report notes, "are closer to clerks processing paperwork rather than investigators solving crimes." The CPI, according to the report, "is currently more of a passive rather than a true investigatory agency. Though legally empowered to conduct investigations, the combined security situation and the violent character of the criminal elements within the ministries make investigation of corruption too hazardous."

CPI staffers have been "accosted by armed gangs within ministry headquarters and denied access to officials and records." They and their families are routinely threatened. Some sleep in their office in the Green Zone. In December 2006, a sniper positioned on top of an Iraqi government building in the Green Zone fired three shots at CPI headquarters. Twelve CPI personnel have been murdered in the line of duty. The CPI, according to the report, "has resorted to arming people hired for janitorial and maintenance duty."

Radhi al-Radhi, a former judge who was tortured and imprisoned during Saddam Hussein's regime and who heads the CPI, has been forced to live in a safe house with one of his chief investigators, according to an associate of Radhi who asked not to be identified. Radhi has worked with Stuart Bowen Jr., the Special Inspector General for Iraq Reconstruction, who investigates fraud and waste involving U.S. officials and contractors. His targets have included former Defense Minister Hazem Shalaan and former Electricity Minister Aiham Alsammarae. And Radhi himself has become a target of accusations. A year ago, Maliki's office sent a letter to Radhi suggesting that the CPI could not account for hundreds of thousands of dollars in expenses and that Radhi might be corrupt. But, according to the U.S. embassy report, a subsequent audit of the CPI was "glowing." In July, the Iraqi parliament considered a motion of no confidence in Radhi-a move widely interpreted as retaliation for his pursuit of corrupt officials. But the legislators put off a vote on the resolution. In late August, Radhi came to the United States. He is considering remaining here, according to an associate.

Corruption, the report says, is "one of the major hurdles the Iraqi government must overcome if it is to survive as a stable and independent entity." Without a vigorous anticorruption effort, the report's authors assert, the current Iraqi government "is likely to loose [sic] the support of its people." And, they write, continuing corruption "will likely fund the violent groups that our troops are likely to face." Yet, according to the report, the U.S. embassy is providing "uncertain" resources for anticorruption programs. "It's a farce," says a U.S. embassy employee. "There is a budget of zero [within the embassy] to fight corruption. No one ever asked for this report to be written. And it was [canned]. Who the hell would want to release it? It should infuriate the families of the soldiers and those who are fighting in Iraq supposedly to give Maliki's government a chance."

Beating back corruption is not one of the 18 congressionally mandated benchmarks for Iraq and the Maliki government. But this hard-hitting report-you can practically see the authors pulling out their hair-makes a powerful though implicit case that it ought to be. The study is a damning indictment: widespread corruption within the Iraqi government undermines and discredits the U.S. mission in Iraq. And the Bush administration is doing little to stop it.
By David Corn
Reprinted with permission from the The Nation

Fewer Americans see climate change as priority than they did a year ago
Thanks for reading CBS NEWS.
Create your free account or log in
for more features.
View CBS News In
CBS News App Open
Chrome Safari Continue
Be the first to know
Get browser notifications for breaking news, live events, and exclusive reporting.