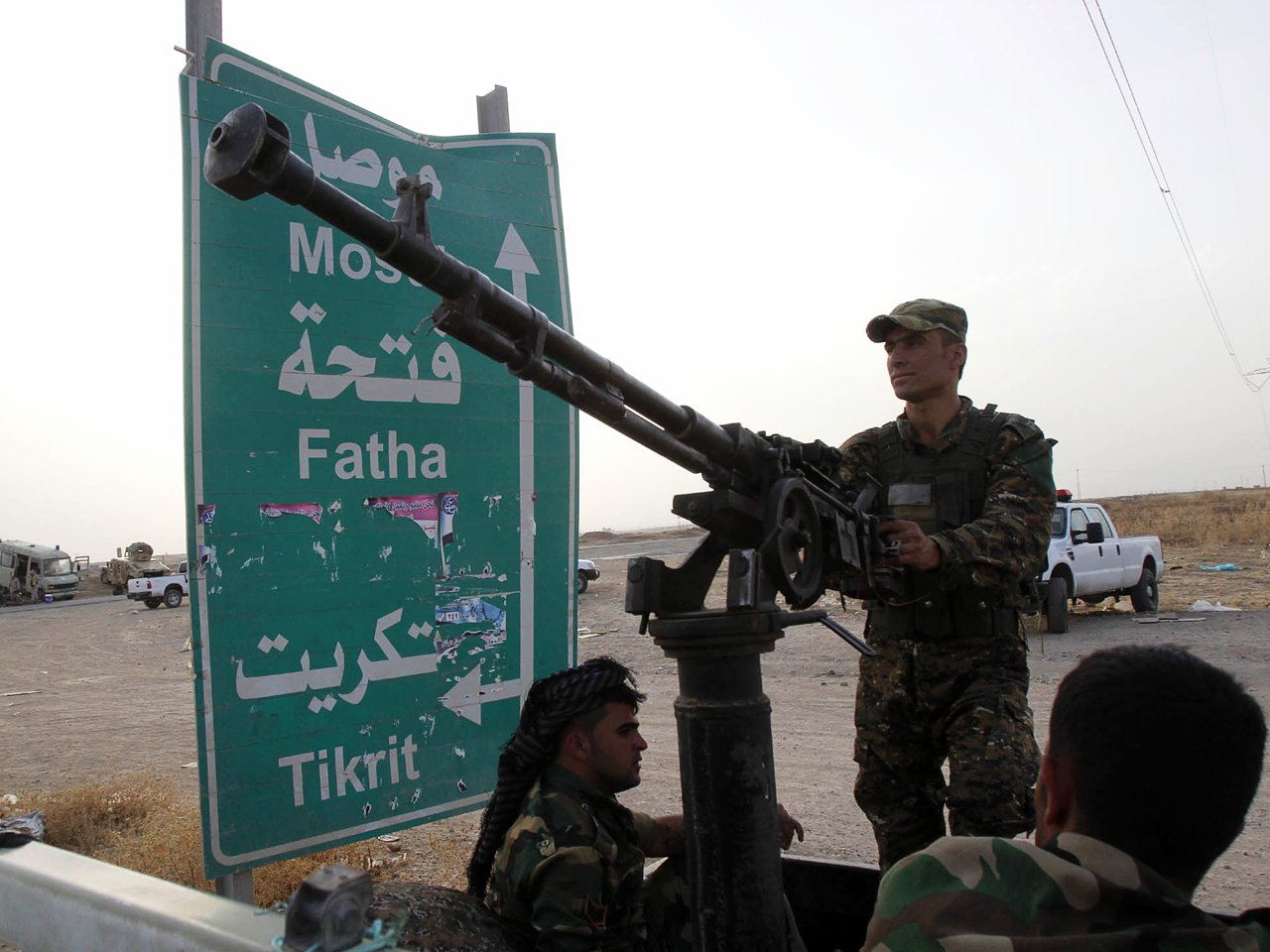 BAGHDAD -- A representative for Iraq's top Shiite cleric on Friday urged Iraqis to defend their country as militants who have seized large swaths of the nation's Sunni heartland captured two towns in an ethnically mixed province northeast of Baghdad.

Neighboring Shiite powerhouse Iran signaled its willingness to confront the growing threat from this week's militant blitz, which the United Nations estimates has claimed hundreds of lives.

The fighters inspired by al Qaeda already hold the major cities of Mosul and Tikrit.

CBS News correspondent Holly Williams reports from the Kurdish-controlled city of Erbil in northern Iraq that a cell phone video showed the Islamic militants putting on a show of force in Mosul, parading vehicles captured from Iraq's military through the country's second biggest city.

A fighter using a loudspeaker urged the people to join the militant group "to liberate Baghdad and Jerusalem." The black banners of the al-Qaeda-inspired Islamic State of Iraq and Syria (ISIS) adorned many of the captured vehicles. Some in the crowd shouted "God is with you" to the fighters.

The fresh gains by insurgents, spearheaded by fighters from ISIS, also known as the Islamic State of Iraq and the Levant, or ISIL, come as Prime Minister Nouri al-Maliki's Shiite-led government struggles to form a coherent response after militants overran Mosul, Saddam Hussein's hometown of Tikrit and smaller communities, as well as military and police bases - often after meeting little resistance from state security forces.

The fast-moving rebellion, which also draws support from former Saddam-era figures and other disaffected Sunnis, has emerged as the biggest threat to Iraq's stability since the U.S. withdrawal at the end of 2011. It has pushed the nation closer to a precipice that could partition it into Sunni, Shiite and Kurdish zones.

He said top U.N. rights official Navi Pillay plans to issue a statement later Friday expressing alarm at the rapid deterioration of security in Iraq, and said the office has received reports that Iraqi army soldiers as well as 17 civilians in a single street in Mosul had been rounded up and killed by militants.

The assault also threatens to embroil Iraq more deeply in a wider regional conflict feeding off the chaos caused by the civil war in neighboring Syria.

Iran's official IRNA news agency reported Friday that former members of Tehran's powerful Revolutionary Guard have announced their readiness to fight in Iraq against the Islamic State, while Iranian state television quoted President Hassan Rouhani as saying his country will do all it can to fight terrorism next door.

"The Islamic Republic of Iran will apply all its efforts on the international and regional levels to confront terrorism," the report said Rouhani told al-Maliki by phone.

Iran has built close political and economic ties with postwar Iraq, and many influential Iraqi Shiites have lived for stretches of time in the Islamic Republic. Iran earlier this week halted flights to Baghdad because of security concerns and said it was intensifying security measures along its borders.

"Citizens who can carry weapons and fight the terrorists in defense of their country, its people and its holy sites should volunteer and join the security forces," al-Karbalaie said.

Residents of Jalula said the gunmen issued an ultimatum to the Iraqi soldiers not to resist and give up their weapons in exchange for safe passage out. After seizing the town, the gunmen announced through loudspeakers that they have come to rescue residents from injustice and that none would be hurt.

The officials spoke on condition of anonymity because they were not authorized to talk to journalists, and the residents declined to give their names because of fears for their safety.

The Islamic State has vowed to march on Baghdad, but with its large Shiite population, the capital would be a far more difficult target.

So far, the militants have stuck to the Sunni heartland and former Sunni insurgent strongholds where people are already alienated by al-Maliki's government over allegations of discrimination and mistreatment. The militants also would likely meet far stronger resistance, not only from government forces but by Shiite militias.

Still, Baghdad authorities have tightened security around the capital and residents are stocking up on essentials. Hundreds of young men crowded in front of the main army recruiting center in Baghdad on Thursday after authorities urged Iraqis to help battle the insurgents.

Trumpeting their victory, the Islamic militants also declared they would impose shariah law in Mosul, which they captured on Tuesday, and other areas they seized.

In northern Iraq, Kurdish security forces have moved to fill the power vacuum caused by the retreating Iraqi forces - taking over an air base and other posts abandoned by the military in the ethnically mixed city of Kirkuk.

Three planeloads of Americans were being evacuated from a major Iraqi air base in Sunni territory north of Baghdad, U.S. officials said Thursday, and Germany urged its citizens to immediately leave parts of Iraq, including Baghdad.

President Obama said Iraq will need more help from the United States, but he did not specify what it would be willing to provide. Senior U.S. officials who spoke to The Associated Press on condition of anonymity because they were not authorized to discuss the matter by name said Washington is considering whether to conduct drone missions in Iraq.

"We do have a stake in making sure that these jihadists are not getting a permanent foothold in either Iraq or Syria, for that matter," Mr. Obama said in Washington.