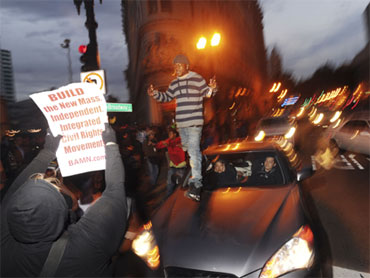 The largest one occurred in the northern Kurdish city of Irbil. A suicide car bomber dressed as a policeman slammed into a large group of traffic police officers gathered for morning roll call, killing 15 and wounding more than 100 others, police and hospital officials said.

The U.S.-led Operations Spear and Dagger, which began over the weekend and are aimed at destroying militant networks near the Syrian border and north of Baghdad, appeared to be winding down. U.S. and Iraqi forces have killed about 60 insurgents and 100 captured so far, while one Marine has been killed and three others wounded.

A suicide car bomber ripped through a convoy carrying a Kurdish town's security director Monday, killing him and three of his bodyguards, said Anwar Kokoyei, a senior official of the Patriotic Union of Kurdistan political party.

The attacked happened in Halabja, the same town where Saddam Hussein and other former regime officials will face trial for their alleged roles in a 1998 poison gas attack that killed at least 5,000 people.

The rate of insurgent attacks has risen dramatically since Prime Minister Ibrahim al-Jaafari announced his Shiite-led Cabinet on April 28. At least 1,189 people have been killed since then, according to an Associated Press count based on military, police and hospital reports.

Sunni Arabs are believed to make up the core of Iraq's insurgency and many of them boycotted historic elections in January, leaving them politically sidelined and embittered by the rise of the Shiites and the Kurds — two communities that account for about 80 percent of the country's estimated 26 million people.

The insurgency has especially targeted Iraqi security forces, because they are seen as collaborators of the U.S. and Shiite-led governments.

Some extremists have also started threatening fellow Sunni Arabs, because some leaders of the minority Muslim sect have expressed a readiness to join the political process.

On Monday, Sunni Arabs were expected to name their representatives to a committee that has until mid-August to draft Iraq's new constitution. The number of Sunni members took weeks to negotiate with the Shiite majority.

At least one American has died since the new military campaigns — code-named Spear and Dagger — began Friday and Saturday, respectively, in Anbar province. About 1,000 U.S. and Iraqi forces are taking part in each offensive.

Operations Spear and Dagger are aimed at destroying militant networks near the Syrian border and north of Baghdad, the military said. About 60 insurgents have been killed and 100 captured so far.

Troops taking part in the new military campaigns - code-named Spear and Dagger - said they found numerous foreign passports and one round trip air ticket from Tripoli, Libya, to Damascus, Syria. They found two passports from Sudan, two from Saudi Arabia, two from Libya, two from Algeria and one from Tunisia.

Intelligence officials believe Anbar province is a portal for extremist groups, including Abu Musab al-Zarqawi's al Qaeda in Iraq, to smuggle in foreign fighters. Syria is under intense pressure from Washington and Baghdad to tighten control of its porous 380-mile border with Iraq.

Operation Spear appeared to be winding down and U.S. Marines reported finding a weapons cache in the town of Karabilah early Monday, including two dozen RPG launchers, heavy machine guns and equipment to make up to 25 bombs.

The dusty town is about 200 miles west of Baghdad and near Qaim, a city on the Syrian border.

Troops also found a large number of explosives in the building and conducted a controlled blast, leveling an entire block, according to an AP reporter in the town. Many residents had already left their homes for safer areas and portions of the town have been reduced to rubble.