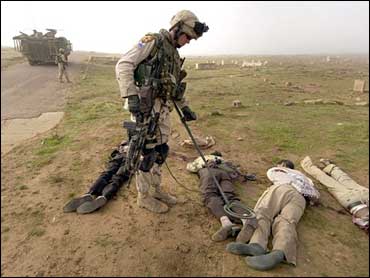 Iraq's deputy prime minister said holding elections in January will be "a serious challenge," but he insisted Sunday they must go ahead as scheduled. As part of the effort to address security concerns, U.S. troops and Iraqi paramilitary police arrested 43 suspected insurgents in the northern city of Mosul, the military said.

In Samarra, 60 miles north of Baghdad, a car bomb exploded outside a high school, killing six people and injuring five others, reports CBS News Correspondent Charles D'Agata. Two American soldiers were injured in an attack on their convoy in Baghdad.
Over the weekend, Iraq's most powerful Shiite cleric, Grand Ayatollah Ali Sistani, signaled he feels the elections should not be delayed. The long-repressed Shiite majority he represents has the most to win from democracy.
Sunni leaders, on the other hand, have urged that elections be delayed until the violence that wracks predominately Sunni areas of the country fades. The Sunni's have long controlled Iraq, despite their minority status, and had special favor under Saddam Hussein.

Elections are a prerequisite for pulling out U.S. and British troops.

Deputy Prime Minister Barham Saleh said delaying the scheduled Jan. 30 vote would have "serious ramifications to the political process" and would bolster the cause of terrorists.

"Under the law it cannot be postponed and the government is working on the premise that the elections will be held on time," Saleh told the British Broadcasting Corp.

Saleh, a spokesman for interim Prime Minister Ayad Allawi, a secular Shiite, said Saturday the government was sticking by the Jan. 30 date after receiving assurances from the Iraqi Electoral Commission that an election could take place even in Sunni areas wracked by the insurgency.

Saleh acknowledged there were security problems in certain areas but said the assault on the insurgent stronghold of Fallujah would deny the terrorists "a major safe haven."

"Sticking to that timetable will be difficult, will be a serious challenge," he said. "But delaying elections will be much more difficult because it will have serious ramifications to the political process, to the issue of legitimacy, and surely all of us do not want to give the terrorists the slightest of technical wins in that situation."

The blast in Samarra occurred as a minibus drove past a school in the 7-Nissan district of the city, said police Maj. Qahtan Mohammed. All the casualties were passengers in the minibus, he said.

U.S. and Iraqi troops regained control of Samarra from insurgents during military operations in September but the city remains uneasy.

In Mosul, the 43 suspected insurgents were arrested as part of an ongoing operation to re-establish control of Iraq's third-largest city, a military statement said.

Members of Task Force Olympia — which is responsible for security in Mosul and northern Iraq — and Iraqi police commandos conducted a series of raids throughout the city on Saturday, the statement said.

At least 50 people have been killed in Mosul in the past 10 days. Most of the victims are believed to have been supporters of Iraq's interim government or members of its fledgling security forces.

The killings appear to be part of a campaign of violence against government supporters launched by rebels after an armed uprising in the city earlier this month. The bloodshed has cast doubt on the Iraqi forces' ability to protect the country.

Elsewhere, two U.S. soldiers were injured early Sunday when a car bomb exploded next to their military convoy on the road leading to Baghdad's airport, a military statement said. The bomb damaged one vehicle, the military said, and two soldiers were taken to a military hospital.

The military statement said there were no reported civilian casualties. But the interim government's Youth Ministry reported that its general director, Ahmed Faiq, and his bodyguard were injured in the attack.

Fadhil Jawad, who said he watched the attack from his roof, described a late-model luxury car overtaking the six-vehicle convoy moments before exploding in a ball of fire.

Jawad said two Humvees in the convoy were destroyed by the blast and the rest scattered off the road. Two Black Hawk helicopters arrived to evacuate wounded soldiers, he said.

A military spokesman said he could not comment on the report that two vehicles were destroyed.

The highway leading from downtown to the international airport is considered one of the most dangerous stretches of road in Iraq for U.S. troops. Insurgents regularly target military convoys and combat patrols on the busy thoroughfare.