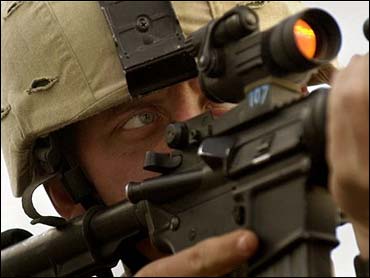 Gunmen on Monday assassinated a member of an influential Sunni clerics' group that has called for a boycott of national elections, just a day after Iraqi officials announced the balloting would be held Jan. 30 in spite of rising violence in Iraq.

Sheik Faidh Mohamed Amin al-Faidhi, a member of the Association of Muslim Scholars, was shot by gunmen at his home in northern Mosul — a sign of the continuing violence that wracks the country.

Iraq's first elections since the collapse of Saddam Hussein's dictatorship are scheduled for Jan. 30, and Iraqi authorities said ballots will be cast even in volatile areas — including Fallujah, Mosul and other parts of the Sunni Triangle

The vote for the 275-member National Assembly is seen as a major step toward building democracy after years of Saddam's tyranny.

The ongoing violence, which escalated this month with the U.S.-led offensive against Fallujah, has raised fears voting will be nearly impossible in insurgency-torn regions — or that Sunni Arabs angry at the U.S.-Iraqi crackdown will reject the election. If either takes place, it could undermine the vote's legitimacy.