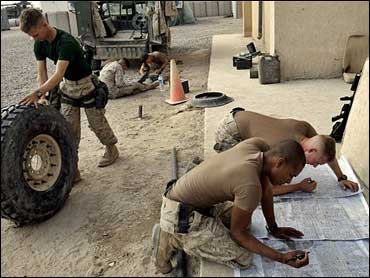 The government declared a 60-day state of emergency throughout most of the country Sunday, as U.S. and Iraqi forces prepared for an expected all-out assault on rebels in Fallujah. Insurgents escalated a wave of violence that has killed more than 50 people the past two days.

Heavy explosions were heard in Baghdad as government spokesman Thair Hassan al-Naqeeb announced the state of emergency over the entire country except Kurdish areas in the north.

"It is going to be a curfew. It is going to be so many things, but tomorrow the prime minister will mention it," he said. Interim Prime Minister Ayad Allawi will give more details Monday, he said.

Al-Naqeeb declined to say whether the announcement signaled an imminent attack on the insurgent stronghold Fallujah, saying, "We have seen the situation is worsening in this area. Any obstacle will be removed."

The statement came as insurgents carried out a second day of assaults in central Iraq, attacking police stations, gunning down government officials and setting off bombs.

Two attacks on U.S. convoys in and around Baghdad killed one American soldier and wounded another Sunday, the military said. Residents reported grenades setting police cars aflame on Haifa Street in the heart of the city.

Reda Jawad Taqqi, a spokesman for a major Shiite political party, said that neither Abdel-Mahdi nor any of his family were in his house at the time. "They are all safe, thank God, the minister and his family," Taqqi told the Associated Press.

The U.S. military said the bomb killed one Iraqi bystander and wounded another. A U.S. patrol came under small-arms fire as it responded, wounding one soldier, a statement said.

The wave of violence sweeping the troubled Sunni Triangle north and west of Baghdad may be aimed at relieving pressure on Fallujah, where about 10,000 American troops are massing for a major assault if Allawi gives the green light.

At dawn Sunday, armed rebels launched deadly attacks against police stations in western Anbar province, killing 22 people according to police and hospital officials. At least seven of those killed were policemen, who were lined up and shot execution style.

Also Sunday, three Diyala provincial officials were gunned down south of Baghdad as they were on their way to a funeral in Karbala for a fourth colleague assassinated earlier this week. Governor's aide Jassim Mohammed was killed along with Diyala provincial council members, Shihab Ahmed and Dureid Mohammed, an Iraqi official said.

The attacks came a day after insurgents in Samarra stormed a police station, triggered at least two suicide car bombs and fired mortars at government installations. Twenty-nine people, including 17 police and 12 Iraqi civilians, were killed throughout the city, the U.S. military said. Forty others were injured.

A suicide bomber using an explosive-packed Iraqi police car rammed a U.S. convoy in Ramadi, wounding 16 American soldiers, according to the military.

On Thursday, militants dressed as policemen abducted and executed a group of 12 Iraqi National Guardsmen who driving home in a convoy to Najad, a top Shiite political party said Sunday.

Early Sunday, Marines fired a barrage of artillery at rebel positions inside Fallujah and clashed with insurgents carrying AK-47s, killing at least 16. Two U.S. soldiers were wounded at midnight at a checkpoint near Fallujah, the U.S. military said.

In Web postings, the al Qaeda affiliate group of Abu Musab al-Zarqawi claimed responsibility for the attacks in Samarra, Ramadi and Baghdad. The claims could not be verified, but U.S. officials believe al-Zarqawi's group uses Fallujah as a base.

On Sunday, Lt. Gen. John F. Sattler, commanding general of the 1st Marine Expeditionary Force, gave a rousing pep talk before 2,000 to 3,000 Marines at a base near Fallujah.

"You can feel the energy. You can feel the chemistry. You're going to give that to the Iraqi forces as they join that fight. God bless you, each and everyone. You know what your mission is. Go out there and get it done," he said.

U.N. Secretary-General Kofi Annan and others have warned that a military offensive could trigger a wave of violence that would sabotage the ballot.

The violence in Samarra underscored the difficulty of maintaining civilian authority in Sunni areas even after the worst of the fighting ebbs.

"The experience that occurred in Samarra is now being repeated again in Fallujah, and we can see that nothing was achieved in Samarra," Ayad al-Samaraei of the Sunni-led Iraqi Islamic party told Al-Jazeera television. "The situation is still as it was before" in Samarra.

"I cannot claim that entering Fallujah will end the terrorist attacks in Iraq," Iraq's national security adviser, Qassem Dawoud, told Al-Arabiya television. "But I can say that we will deal with a very big pocket of terrorism in Iraq and we will uproot it. This pocket forms the backbone and the center for terrorists in other areas in Iraq."